Obituary for A. Maughan Lee 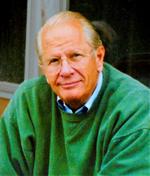 A. Maughan Lee, our cherished husband, father, grandfather and great-grandfather, 84, passed on to “phase next” on September 14, 2018. He was born on May 3, 1934 in Salt Lake City, Utah to David Alton Lee and Sarah Owen Maughan. Maughan was raised in Caliente, Nevada and Montebello, California.

Although a man of letters (Ed.D, Ph.D, MS, BA, PMA, LTJG, USN, etc., and an all-around Renaissance Man), Maughan was very down-to-earth and approachable by anyone. In spite of his many accomplishments, his family was his top priority. He made it clear that the best thing he ever did was to accept Carol’s marriage ultimatum. They were married in the Los Angeles Temple on February 8, 1957. Maughan had a strong testimony of the gospel of Jesus Christ. More than by words, he showed it in the compassion he had for the people around him. He will be greatly missed.

Maughan was blessed (or cursed?) with an amazing intellect and a unique perspective of the world. It seemed he could build, design or create anything. His love of cars stayed with him throughout his life and was genetically passed down to his four kids. Heaven help them.

He will be remembered for…

His quick wit and wry sense of humor. Taking the English language to levels rarely imagined. His grape arbor. His love of Hawaii and the Polynesian culture. His car collection on the driveway (much to the chagrin of the neighbors). His legendary “get out of school” notes for the kids – instead of writing that he was taking us skiing, he would say we were involved in “a high altitude precipitation research project.”

Maughan proudly served as an officer in the US Navy. Thereafter, he enjoyed a very successful career with the federal government, working for a certain agency that shall remain unnamed. No one really knows what Maughan was up to all those years. When asked what he did during his years of service, Maughan would reply, “This and that, here and there.”

Our heartfelt thanks to Provo's outstanding first responders and the wonderful doctors and nurses at Utah Valley Hospital.

Memories may be shared on the Nelson Family Mortuary website at www.NelsonMortuary.com