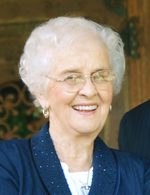 Blaine Benjamin and Afton Allsop Godfrey continued their eternal love story passing to the next life together at the age 93. Afton passed away the evening of March 2 and immediately sent for Blaine who followed 38 hours later on March 4 in the early morning. They lived together to the very end at the Ashford Assisted Living facility in Springville Utah.

Blaine was born to Lewis Nephi Godfrey and Anna Charlotte Hemmert on August 31, 1926 in Clarkston Utah the second of four children and oldest son. Afton was born four months later to Lew P. and Velva Dean Allsop on January 4, 1927 in Lewiston, Utah the second of seven children. Afton later moved to Trenton Utah.

Blaine enjoyed a treasured relationship with his grandfather John E. Godfrey who was a contemporary of Martin Harris and whose testimony as one of three witnesses of the Book of Mormon had a lifetime impact on his life and that of his posterity.

Blaine and Afton both grew up on farms and learned how to work hard and carry,, responsibilities which were large for their ages. Afton hoed beets and tended turkeys while Blaine herded cattle and pulled farm implements from the back of draft horses. They met each other at North Cache High School in Richmond Utah during Blaine’s Junior year.

Immediately after graduation he joined the US Navy and served in World War II. He was one of the first recipients of the miracle drug penicillin which saved his life from his raging scarlet fever. Upon returning from the war Blaine and Afton were married in the Logan Temple on December 19, 1946 and lived a true-life love story for 73 years. After getting married Blaine attended Utah State University on the GI Bill where he studied Industrial Arts Education. Afton made their first home in Trenton where their oldest two sons were born.

Blaine and Afton moved to Idaho Falls in 1951 where Blaine was employed by the Bonneville School District for 30 years. He began his career as an industrial arts teacher and built houses to supplement his income during the summer. He became an especially skilled finish carpenter and furniture builder. He later enjoying success as a licensed agent for Massachusetts Mutual where he was often recognized for his leadership.

Together Blaine and Afton built their home in Ammon Idaho where they lived for over 60 years and enjoyed many family gatherings. They kept their home modern and attractively decorated while raising their six children. Afton was talented with many homemaking arts such as gardening, canning and was well known as an excellent seamstress. Afton provided dinner every evening for many years to the elderly neighbors across the street before serving her own family meal.

Blaine and Afton served their neighbors and fulfilled many leadership assignments in the Church of Jesus Christ of Latter-day Saints. Afton served in presidencies of all stake and ward women’s organizations. Blaine also served in many stake and ward callings including Bishop of two different wards spanning eight years. They both magnified their callings as visiting and home teachers ministering to dear friends in both word and deed. Together Blaine and Afton served 20 years at the Idaho Falls Temple before retiring to serve full-time missions to the London England South and Oakland California Missions. When their health became a concern they moved to Utah Valley to be closer to their kids while their children took turns following their examples serving missions abroad.

Blaine is preceded in death by his parents Lewis Nephi Godfrey and Anna Charlotte Hemmert, his siblings, Carol Sampson, Mark Godfrey and Doris Nelson. Afton is preceded in death by per parents Lew P Allsop and Velva Dean Jamison along with her brothers Judd and Val Allsop and sister Elaine. Blaine and Afton’s oldest son Keith also went ahead to prepare a place for them; along with their great granddaughter Madeline Pykles.

Blaine and Afton are survived by five of their six children. D. Kent and Patrice Godfrey, Lanette and Lynne Pettit, Marilyn and John Chatterton, Gary and Karie Godfrey and Nancy and Ron Pierce and Lauren Godfrey Buttars daughter-in-law. They are so proud of their 28 grandchildren and 77 great grandchildren. Afton is also survived by two little brothers, Sid and Louise Allsop, Richard and Cleone Allsop, sister-in-law Kathryn and little sister LuDean Dixon.

Their funeral will be held at 11:00 AM Saturday, March 7, 2020, at the Chapel located at 1051 East 200 South, Lindon, Utah. The family will visit with friends and family Friday, March 6th from 6 - 8 PM at Nelson Family Mortuary, 4780 N. University Avenue, Provo Utah and Saturday, March 7 from 9:30 - 10:45 AM prior to funeral services. Interment will be in the Clarkston Utah Cemetery. To express condolences visit www.NelsonMortuary.com