To share your memory on the wall of Ane Fale, sign in using one of the following options:

She was born on February 7, 1939, in Kolofo’ou, Nukualofa, Tonga. Her father was Viliami Makahokovalu Vavae Lavulo and her mother was Taise Tai Fehoko.

Ane and her brother Lisiate were raised by Noble Fielakepa and Losana. She was an alumni of the Catholic Boarding High School for girls, a graduate of the 1957 class.

Ane’s life was centered around her immediate and extended family. She was a fast learner and was gifted with her hands. She sewed, and she learned to mend her husband’s various fishing nets for it was part of their livelihood.

Ane learned from watching her beloved inlaws, how to Tui kakala hingoa (stringing traditional fragrant flowers). She mastered this art and it became her trade, her masterpieces becoming sought after by many.

Consider providing a gift of comfort for the family of Ane Fale by sending flowers.

We encourage you to share your most beloved memories of Ane here, so that the family and other loved ones can always see it. You can upload cherished photographs, or share your favorite stories, and can even comment on those shared by others. 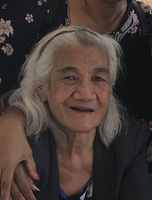 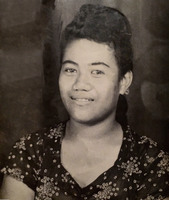