To share your memory on the wall of Betty Robertson, sign in using one of the following options:

She graduated from Bay High School in Panama City in 1949 and a year later served her first mission for the Church of Jesus Christ of Latter Day Saints in the Southern States Mission at age 18. After her mission she met and married Dewey Lee Robertson with whom she had her four children. They later divorced. She worked and struggled to raise her children alone and never remarried.

She took piano lessons at age 8 and learned very quickly because her small branch needed a piano player. She spent most of the rest of her life playing the piano or organ in her branch or ward. She was always actively involved in church music, either playing, conducting or singing. She served in many other callings. She spent a great deal of time in genealogical research. Her greatest passion, other than her family, was missionary work among the living and the dead. After retirement she served a mission in the Family History Department of the church.

She will be greatly missed by her family but know she is rejoicing with family that preceded her. She will especially be looking for those with whom she shared the gospel in this life and those she searched out through family history that may have accepted the gospel in the spirit world.
Read Less

Consider providing a gift of comfort for the family of Betty Robertson by sending flowers.

We encourage you to share your most beloved memories of Betty here, so that the family and other loved ones can always see it. You can upload cherished photographs, or share your favorite stories, and can even comment on those shared by others.

Posted Jan 18, 2020 at 11:53am
My dear Betty, how I'll miss our phone visits. You are one of my sweetest friends. I envy you getting to meet all the ancestors you have done Temple work for. Your reunion with them must be one of the highlights of your life!
I am so glad we met on our life's journey. I'll always love you. Posted Dec 28, 2019 at 12:39pm
How I love Betty! We were all so fortunate to have her in the Elk Ridge 9th Branch. Betty was an inspiration to all of us. She wanted to share her testimony whenever she could. Her desire to be a missionary for the Lord and the Church was constant and immovable. She was always looking out for all the other residents and would let us know when others were in need of help. She had a genuine concern for neighbors and tried to encourage and pray for them. She had acute sense of humor and was always so appreciative of all that was done for her. I loved how she loved good music and encouraged us in adding music whenever possible. She will definitely be missed at ElkRidge Assisted Living Center. She left the world a better place.
Love Always,
Wendy Pope
Comment Share
Share via:
LM

Posted Dec 27, 2019 at 11:11am
Aunt Betty remembered everyone's birthday. She always sent a note or called to wish a happy birthday. She also used to write letters. I guess she would write things that she felt were important that she wanted to share, but wanted it to personal and when you had time to read it and think about it. She was also a lot et of family history. We know who many of our ancestors are because of her dedicated research during years that it was much more difficult to find information.
We will all.miss her, but as I think of the great reunions she is having now without her physical limitations makes me smile! See ya later Aunt Betty!
Comment Share
Share via:
NC

Posted Dec 27, 2019 at 11:05am
Whenever I was a boy, she would play the piano and I would sing, "I am a Mormon boy." Her youngest brother, baby of seven siblings, Nephi Pratt Clanton.
Comment Share
Share via: 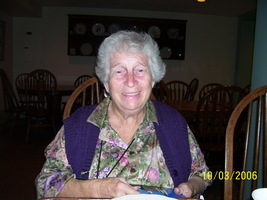