To share your memory on the wall of Brad Anderson, sign in using one of the following options:

Print
TO WATCH WEBCAST CLICK ON "PHOTOS & VIDEOS" TAB: If on a cell phone scroll to the bottom.

Brad Gregory Anderson, age 67, passed away on May 4, 2020, after succumbing to a lifelong battle with mental illness. He was born on July 30 (not 3... Read More
TO WATCH WEBCAST CLICK ON "PHOTOS & VIDEOS" TAB: If on a cell phone scroll to the bottom.

Brad Gregory Anderson, age 67, passed away on May 4, 2020, after succumbing to a lifelong battle with mental illness. He was born on July 30 (not 31st), 1952 in Logan, Utah to Keith Anderson and Marilyn Jaacks.

Brad was raised in Logan and was a passionate and skilled athlete. He excelled at many sports but was particularly drawn to golf and snow skiing. Growing up, he spent his summers at Logan Country Club where he developed a world-class golf swing and won a bet or two off of some of the old-timers. During the winters, Brad was at Beaver Mountain, where he developed world-class ski form. He golfed competitively throughout his life and attended Utah State University on a golf scholarship. Brad was a wonderful teacher and shared his love for sports, particularly golf and skiing, with his siblings, children, and grandchildren. Even as his abilities began to decline in recent years, he never stopped skiing and he never lost his beautiful swing.

Brad had a creative and inquisitive mind and he emphasized academics and a love for learning. Brad studied psychology and earned a bachelor’s degree at Utah State. He subsequently earned his master’s degree in organizational behavior at BYU (the only program in the state at the time). Brad met his wife, Debbi, while attending Utah State and they were married in the Ogden Temple on August 20, 1974. Following his studies, the young family moved to Electric City, Washington, Eugene, Oregon, and Fremont California before settling in Orem, Utah.

Brad was a founder and a vice president at Covey Leadership Center where he developed award-winning films exemplifying the 7 Habits. Brad was also a gifted writer: he played a major role in authoring multiple books and recently had his own book published, A View From Under My Desk, which examines workplace depression.

Brad was a devoted and passionate father. He was proud of his children and grandchildren who love and will miss him dearly. Despite his internal struggles, he placed his family first and provided his children with an idyllic childhood. He coached his kids and grandkids in virtually every team sport – even when he did not know what he was doing. He was generous and paid registration fees for dozens of kids who would not have otherwise been able to participate.

Coaching or not, he made it a point to be there (usually wearing skate shoes) for everything: dance, cheer, tennis, golf, skiing, basketball, soccer, baseball, recitals, plays and any other performances. Brad had his differences with the “family boat” and the inevitable mechanical failures, jet-ski crashes, and physical injuries that were part of classic Anderson outings. Knowing how much his family cherished time together on the boat, he put those differences aside and regularly took the family on vacations to Lake Powell, Bear Lake, Hebgen Lake, and early morning/weekend trips to Deer Creek and Utah Lake.

An Aggie through and through, he was doubtless somewhat crestfallen when most of his kids ended up studying at BYU (and even more so when tuition payments became due). True to form, he placed the happiness and needs of others before his own and supported his children in their academic and professional pursuits. Ironically, perhaps, Brad also served as a Bishop for a BYU singles ward, where he worked tirelessly to help hundreds of students (and entertain them, as well, with his (in)famous Living La Vida Loca performance). He was honest with others and looked for opportunities to serve, often in anonymity. He found value in volunteering at elementary schools and mentoring children living in difficult circumstances. He remained close with many of those he served and had a positive effect and lasting influence on the lives of countless young people.

Brad enjoyed reading and discussing with friends and family the many articles, pictures, and videos he would email or text them, which covered a broad range of subjects. Typically the subjects related to world history, rock ‘n roll history, New York Times articles, Apple products and, of course, golfing and other sports.

We will remember Brad most dearly for his quick-wit and uniquely hilarious sense of humor. He invented the bowling game (to bribe kids into being quiet during General Conference) with an accompanying jingle. In fact, with limited natural musical talent, Brad wrote dozens of family-specific musical numbers (we celebrate his entire catalogue but some favorites include the timeless classics Gizmo oh Gizmo, The Fat-Calf Family, We’re All Gassed Up and Ready to Go, and new parodies to the Brady Bunch title sequence at his kids’ weddings). Brad often relayed messages by leaving notes taped to the fridge, on the counter, over the toilet, everywhere, reminding his kids to do their chores, lock the door, lift the lid (boys bathroom), turn off the lights, avoid the hazardous horizontal (during the dating years), etc.

Brad loved to tell jokes and make others laugh, but it was no secret that he struggled with severe depression throughout most of his life. He spoke openly about his struggles with mental illness, became involved in supporting others with similar struggles, published articles and a book on workplace depression, and sought various forms of treatment. Although he lost his final fight, he won many battles against his disease for decades. And although we mourn his passing greatly, we are grateful he is free from the pain and he endured. We will remember Brad for the good and light he gave to others and his perseverance and resolve against an unrelenting foe. When we think of Brad playing the great fairways of heaven, we will learn from his life and example. Grow more mindful of mental health and more eager to reach out and lift the burdens of others.

Due to the current health situation, a private graveside service will be held at the Orem City Cemetery. Condolences may be sent to the family online at www.nelsonmortuary.com. In lieu of flowers, hug your family and tell them how much you love them.
Read Less

Receive notifications about information and event scheduling for Brad

We encourage you to share your most beloved memories of Brad here, so that the family and other loved ones can always see it. You can upload cherished photographs, or share your favorite stories, and can even comment on those shared by others.

Posted May 11, 2020 at 10:04pm
Brad worked with me at Covey Leadership Center back in the day. It was a pretty special time for all of us — most of whom had just graduated school and were starting our careers. Brad made us laugh, was definitely the adult in the room but still had his silly sense of humor. I remember we made a fake book Cover called “I Was a Beauty Queen and You Can Be One Too” for one of the team members and Brad presented it as our new flagship product in a big product meeting. His sense of humor always intact., Good to the core. Had such pride of ownership. Loved us.
Comment Share
Share via:
BF

Posted May 11, 2020 at 09:38am
I was a next door neighbor to Marilyn Jaacks for many years...I think I met Brad several times, but was a youth leader in our ward and Bill was sometimes active in scouts and other programs when with his mother. I would love to reconnect with Bill. If someone could pass my contact information on to him I would appreciate it. I am truly sorry for all at this time of Brad’s passing.
Bryan Felt
281-787-5742
b.felt@sbcglobal.net
Comment Share
Share via:
AH

Posted May 10, 2020 at 09:18pm
I grew up with josh! And was in your stake growing up. I’ve only known of you. You came to know my husband in the last couple months from sleepy ridge and you two had just played a round of golf two weeks ago. I remember him telling me he played with a guy named brad but hadn’t put the two together. My husband was so close to just sleeping in and canceling their tee time but he went and had a good time and I can tell you now he’s grateful he took the opportunity to play golf. My husbands name is tommy forsman and my name is adi hart forsman! My prayers and thoughts are with your family in this difficult time.
Comment Share
Share via:
SJ

Posted May 10, 2020 at 08:59pm
Deeply saddened to hear about Brads passing.He lived a full life of fun,service and passion,
Scott Jessen
Comment Share
Share via:
KW

Posted May 09, 2020 at 10:26pm
I still can't believe this is real. Brad was unflinchingly honest about his pain, but also unfailingly generous, proud of his family, wicked funny, and a tireless champion of mine...at a time when I needed it most. I've spent the better part of 25 years trying to repay his many kindnesses, but will have to be at peace with the uneven score. Thank you for being my friend and for fighting so bravely, so long. See you on the other side, brother.
Comment Share
Share via: 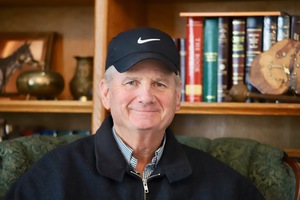 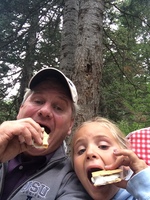 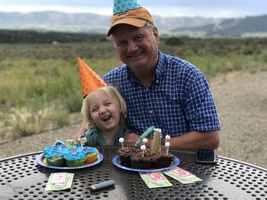 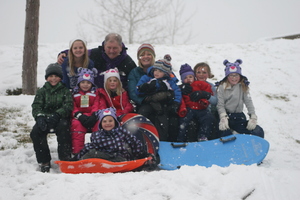