To share your memory on the wall of Brady Jensen, sign in using one of the following options:

Print
On Sunday, May 26, 2019 an angel left this earth for heaven. Our wonderful son, Brady Michael Jensen, 16, passed away peacefully at his home in Provo Utah, from difficulties of Duchenne Muscular Dystrophy.

Brady was born April 16, 2003... Read More
On Sunday, May 26, 2019 an angel left this earth for heaven. Our wonderful son, Brady Michael Jensen, 16, passed away peacefully at his home in Provo Utah, from difficulties of Duchenne Muscular Dystrophy.

Brady was born April 16, 2003, the third child of Nathan and Natalie Jensen. He came with big blue eyes, and a full head of hair looking like his Grandpa John Jensen. His two older siblings were so excited to hold him and play with him.

From the very beginning, Brady was sweet, loving, and smart. He also had a very strong will and stubborn streak that could take you by surprise. He knew what he wanted and went for it. He would stand up for himself, and not let anyone push him to do something he didn't want to do. As a young child, Brady loved to be outside kicking and playing ball. He loved Legos, video games, sports, Star Wars, Nerf guns, and hanging out with friends. He also loved drawing and art which continued until it became too hard to hold the pencil.

He attended Timpanogos Elementary for kindergarten-when it was being rebuilt-so half the year he rode the bus to Lakeview Elementary. He then went to Westridge Elementary where his older brother, Zach, and sister, Sydney, attended. Brady thrived at Westridge because of the nurturing environment, great teachers and staff, and good friends. He had an easy going personality and made friends easily even though he could be shy and didn't like to draw attention to himself. He had a big group of handsome, kind, and athletic friends that included him, hung out with him, took care of him, and called him "Bray-Dawg". Everyone knew who he was, and usually saw him zipping past at top speed in his wheelchair. He did not like to go slow with anything. If it snowed, you could bet he was out doing cookies on the playground. While at Westridge, he worked hard to get good grades, and achieved the Quest for Excellence in 6th grade.

Brady then went on to attend Dixon Middle School, and then Provo High School. He worked hard to get good grades and was a good student. This last year of high school, his sophomore year, he struggled to attend because of his health. The staff, teachers, and friends at Provo were so kind and understanding and worked with his schedule and ability. His counselor, Emily Jiminez, was especially thoughtful and took care of details for Brady.

While at PHS, Brady attended Seminary where he had excellent teachers. He was a very active member of the Church of Jesus Christ of Latter Day Saints. He had a strong testimony of the Savior Jesus Christ. He had a light within that always shone no matter where he was, even when he didn't say a word. People wanted to be around him. He served in his priesthood quorums, with wonderful leaders and friends who always watched out for him. He was able to go on a Pioneer Trek with his stake in the summer of 2016. He had an amazing experience that strengthened his testimony, and he strengthened others around him. All the youth pulled and watched out for him the entire time. He didn't realize what an inspiration he was.

Brady loved to laugh and tease, and was generally happy most of the time. His sense of humor was contagious, and he was especially good with puns and facial expressions. He could come up with a joke anytime and could get anyone to laugh. He had a fun way of being "sassy".

He absolutely loved getting hugs, getting his back or head scratched, and loved to soak up the sun. He was a joy to be around, and left us way too soon. He was loved so dearly, and will be missed by all.

He is survived by his loving parents, Nathan and Natalie Speelmon Jensen, his siblings Sydney, Tyler, and Ashlee. His grandparents Ben and Annette Speelmon (Terreton, Idaho), his best friend and cousin Jaxson Long (Pocatello, Idaho) and numerous aunts, uncles, and cousins on both sides. Preceded in death by his brother Zachary, cousins Jack, Konner, Jake, and Brian, and grandparents John and Beth Jensen (Springville, Utah).

Our family would like to thank the office and staff of Utah Valley Pediatrics (Dr. Richard Later) for their excellent care over the years. Also Dr. Lynn Kerr, and Dr. Kristin Carroll at Shiners Hospital, and all the other medical professionals who have taken care of us. We would also like to thank Make-A-Wish Utah Chapter for sending Brady to Hawaii.
Read Less

Receive notifications about information and event scheduling for Brady

Consider providing a gift of comfort for the family of Brady Jensen by sending flowers.

We encourage you to share your most beloved memories of Brady here, so that the family and other loved ones can always see it. You can upload cherished photographs, or share your favorite stories, and can even comment on those shared by others.

Posted May 29, 2019 at 07:48pm
My heart goes out to the sweetest family! I had the privilege of being Brady's fourth grade teacher. I saw his determination and his stubborn streak. I witnessed how his wonderful group of friends loved and protected him. Brady loved football and especially loved to play it during recess with those wonderful friends (this was at the beginning of the school year when he was still able to walk). I saw how his friends would hand the football off to Brady, then surround him as he walked with it a few yards, then he would pass it off to someone to make the goal. That year fourth grade went on some wonderful field trips...one to Diamond Fork where he was able to don some boots and with some help from one of the dads, went into the water to do some water testing. It was a memory I will cherish. I witnessed a special young man go through, probably one of the toughest times up to that point, the time he was no longer able to walk at school. It was heartbreaking to see his heart break. However, his positive attitude overcame even that. He was truly an inspiration to me and to everyone he came in contact with. I will always cherish my memories of Brady. God bless his wonderful family!
Comment Share
Share via: 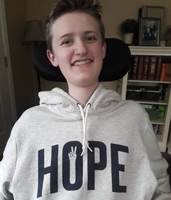