To share your memory on the wall of Charlotte Llewellyn, sign in using one of the following options:

Provide comfort for the family of Charlotte Llewellyn with a meaningful gesture of sympathy.

Print
TO WATCH WEBCASTING CLICK ON "PHOTOS AND VIDEOS" TAB ABOVE.

Charlotte Ann Tippetts Llewellyn was born on Friday, March 13, 1953 in Mount Pleasant, Utah and died at home in Provo, Utah surrounded by her loved ones on Wednesday, April 8, 2... Read More
TO WATCH WEBCASTING CLICK ON "PHOTOS AND VIDEOS" TAB ABOVE.

Charlotte Ann Tippetts Llewellyn was born on Friday, March 13, 1953 in Mount Pleasant, Utah and died at home in Provo, Utah surrounded by her loved ones on Wednesday, April 8, 2020 at the age of 67 after a battle of breast cancer for the past 4 years. Despite being born on Friday the 13th, she was a bright light in people’s lives and always brought luck, smiles, and happiness to everyone around her.

She was born to Stanley and Carol Tippetts and was the second of six children. She lived for her first nine months in Springville, Utah and then moved into her childhood home in Orem, Utah where she lived until she went to college. She attended Hillcrest Elementary School, Lincoln Junior High School, and Orem High School where she graduated in 1971. She then went to Snow College where she received her Associate’s Degree in 1973 and then went to Brigham Young University where received her Bachelor’s degree in elementary education in 1975. During college, she worked at Signetics where she first met her future husband, Phillip Llewellyn, in 1973; however, they did not get married until June 4, 1982 in the Salt Lake Temple. After college, she taught kindergarten in Salt Lake City for 1 year and then transferred to Rock Canyon Elementary School where she taught 4th grade for 29 years. While teaching at Rock Canyon, she had her two sons, Jesse in 1984 and Sean in 1988. The students, parents, teachers, and administration all loved Charlotte, and she received the Gold Apple Teaching Award. After she retired, she was a truancy officer at the Provo School District for 2 years. Retirement life was not for her and she went back to teaching as a computer specialist at Geneva Elementary School for 13 years, after which she retired for good. As evidenced by her long career in elementary education, she had love for teaching and children. She was an active member of the Church of Jesus Christ of Latter-Day Saints and held numerous callings, including primary president, a member of the relief society and the young women’s presidencies, and a service mission at Legacy Retirement Home. She enjoyed reading, cooking, baking, knitting, traveling, shopping, serving others, throwing parties, and spending time with friends and family. She is survived by her husband (Phillip Llewellyn), sons (Jesse and Sean Llewellyn), parents (Stanley and Carol Tippetts), her siblings (Allan and Jeannie Tippetts, Boyd and Pauline Tippetts, Denise and Paul Porter, Eda and Allen Hill, and Floyd and Holly Tippetts), and numerous nieces, nephews, adopted grandchildren, and friends.

The funeral services will take place at the Nelson Family Mortuary on April 13, 2020 at 11am. Interment will be held in the Provo City Cemetery. Funeral attendance at the mortuary is limited to the immediate family but the public is invited to watch the webcasting of the funeral online at www.nelsonmortuary.com.

In lieu of flowers, we would like charitable donations sent to the Huntsman Cancer Foundation in her name at https://us.netdonor.net/page/5121/donate/1.
Read Less

Receive notifications about information and event scheduling for Charlotte

Consider providing a gift of comfort for the family of Charlotte Llewellyn by sending flowers.

We encourage you to share your most beloved memories of Charlotte here, so that the family and other loved ones can always see it. You can upload cherished photographs, or share your favorite stories, and can even comment on those shared by others.

Posted Apr 16, 2020 at 01:05am
Charlotte and Phil and the boys were our neighbors for several years and were such wonderful neighbors. I was so sorry to hear of her passing. She was truly a shining light to all who knew her. We pray for you all at this time of grief and ask that the comforter be with you to help you through.

Posted Apr 13, 2020 at 11:30pm
Phil, Jesse, and Sean...I send my sincere sympathy to each of you that you might be filled with peace that can only come from our Savior, Jesus Christ. I loved Charlotte. I was fortunate to work at Rock Canyon with her for many years. She was always willing to learn new things even if it meant a paradigm shift. I loved her fierce strength that was contained in her petite body. She always had such love and hope for everyone around her. She was there when someone needed to be lifted up. When I think of Charlotte, I see her bright and loving smile.
Sincerely,
Debbie Barlow-Thompson
Comment Share
Share via:
KM

Posted Apr 13, 2020 at 07:52pm
Miss Tippetts was also my 4th grade teacher at Rock Canyon Elementary School, from 1980 to 1981. She was a wonderful teacher. Thank you for ability to listen to her funeral. It brought back some great memories from my time in her classroom. My deepest condolences to her family and immediate friends.
Comment Share
Share via:
DN

Posted Apr 13, 2020 at 02:56pm
Charlotte was an outstanding teacher! She made strong connections with her students and had high expectations for their success. She had a unique sounding voice that always made me smile. Charlotte was also my neighbor when growing up in Orem. A wonderful lady, a caring servant for others. Though small in stature, she was a tough fighter for what she felt was worthy to support and conquer. My thoughts and prayers go out to the family and friends.
Charlotte has graduated from mortality with honors.
Love,
Dean Nielsen
Friend and former school principal at Rock Canyon Elementary
Comment Share
Share via:
PH

Posted Apr 13, 2020 at 02:37pm
Dear Phil, Jessie, and Sean,
We were so saddened to hear of the passing of your sweet wife and mother. She was a fun vivacious ball of happiness and life, such a sweet lady, always happy, cheerful and hopeful. She was so brave and courageous, and suffered much to fight her illnesses. As your loss leaves a hole in your heart, that no one else can fill, know that she is there, and will be watching, loving and caring for you from the other side. You will feel her near at times, and you will see her again someday. It has been nice having you in the ward watching you boys grow up. Your Mom was always very proud of you and your accomplishments, and loves you very much. I'm sorry the circumstances don't allow us to be there for you like we would have liked. Her funeral was very nice, she was very pleased I'm sure. You are in our thoughts and prayers as we pray for comfort and peace to lift you in this difficult time.
Love, Sister (Pam Romney) Held
Comment Share
Share via: 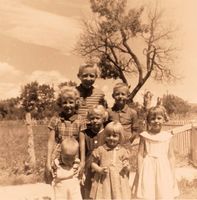