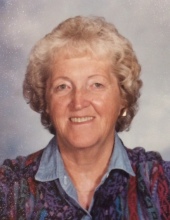 In Memory of
Cleone Lavon
Gotberg
1928 - 2018
Click above to light a memorial candle. 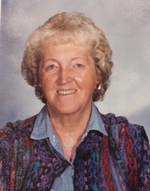 Cleone Lavon Gotberg passed away in Portland, Oregon on Saturday June 16, 2018. She was born March 8, 1928 in Salt Lake City, Utah to Mary Cleone Andersen Gotberg and Arthur Fredrick Gotberg. She was preceded in death by both parents and by her brother Fredie, who died at the age of eight, of meningitis, one month before Lavon was born.

Throughout her youth, Lavon was active with school, church, family, and friends. She graduated in 1946 from South High in Salt Lake City. She then paid her own way through the University of Utah from which she graduated in 1951. Her first teaching position was at Uintah Grade School, teaching fourth grade.

She spent her following summers attending Stanford University from which she graduated with her master’s degree in 1956.

In 1959, Lavon began her career as a civilian school teacher and administrator working for the US Air Force. During her time overseas, she worked in Toul, France; Trier, Germany; Yokota, Japan; and, Hanau, Germany.

The remainder of her teaching career was spent in the Portland Oregon Parkrose School District, teaching 7thgrade.

Among the many highlights of her life, Lavon had tea with Emperor Haile Selassie of Ethiopia, visited the Great Temple of Ramses II before it was relocated, and once took her class on a helicopter tour of the destruction following the eruption of Mt. St. Helens.

Lavon was beloved by many friends, students, and family members. She was especially close to her dear friend Jean Bardwell, formerly of Lewistown, Montana and to multiple Gotberg and Anderson cousins. In later years she enjoyed spending time with their children. Lavon was gracious, thoughtful, and full of enthusiasm for the world around her. She will be missed by so many.

Lavon was an active member of the LDS church. Her funeral services will be held June 29, 2018 at 10 a.m. at the LDS Church, 1300 East Fairfax Road, Salt Lake City, Utah. She will be buried beside her parents and brother in the Salt Lake City Cemetery.

She asked that remembrances be donated to the Intermountain Foundation at Primary Childrens Hospital, PO Box 413168, SLC, UT 84141.