To share your memory on the wall of Connie Wimmer, sign in using one of the following options:

We lost our beloved mother, grandmother, sister, aunt, cousin and friend; Connie Wimmer, when she died unexpectedly in Salt Lake City on January 03, 2020, surrounded by family. Connie was born on September 03, 1945 to Gilbert Ray and Lois Hatch Horrocks, the oldest of four children.

She spent her childhood working at her grandparents’ motel in Duchesne helping with the linens and changing the rooms. She met her sweetheart when she a child. They dated briefly the summer after high school and later eloped in Carmel, California, on August 31, 1968. They went on to have three children, and were sealed in the Provo Temple on September 03, 1974.

Connie graduated from Box Elder High School in 1963, and attended both Utah State University and University of Utah for college. She loved adventures and lived briefly in Hawaii before becoming a surgical scrub nurse at the University of Utah Hospital. She continued to work as a nurse when she moved to southern California in the early years of her marriage. Connie and Lee returned to Utah in 1973 to start a family business with her parents and her brother. She worked at Horrocks Engineers in many capacities until she retired in 1994.

Connie and Lee were the perfect companions as she enjoyed hunting, fishing, boating, long drives, and trips to Alaska as much as Lee. She was creative and artistic and spent many hours sewing, knitting, quilting, and tatting beautiful heirloom pieces for her family and friends. She was a dedicated mother and grandmother, traveling often across the country to visit and spend time with her grandchildren.

Connie was a member of the Church of Jesus Christ of Latter Day Saints. She held many callings in the Grove Creek 6th ward in Pleasant Grove, UT, and also served as a temple worker in the Mount Timpanogos Temple. Connie is survived by her children, LeAnn (Justin) Lindsey, Jason Wimmer, and Shannon (C.J. Peden) Blackerby; grandchildren Rachael, Taylor, Rebekah, Talmage, Emma, and Lauren Lindsey; Emmalee and Alexis Wimmer; and Mykaela and Rylee Blackerby. She is also survived by siblings Linda (Jeff) Smith, Jim (Cindy) Horrocks, and Shelley (Michael) Mann. She was preceded in death by her parents; her granddaughter, Sariah Lindsey and her eternal companion H. Lee Wimmer.

In lieu of flowers please consider a donation to The Cure Alzheimer’s Fund (Link: https://curealz.org/giving/donate/). Cure Alzheimer’s Fund 34 Washington St., Suite 310 Wellesley Hills, MA 02481 The family wishes to thank the medical staff at the University of Utah Emergency Room and Intensive Care Unit and the staff at both Covington Senior Living and Legacy Village of Sugarhouse for their kind care.
Read Less

Receive notifications about information and event scheduling for Connie

Consider providing a gift of comfort for the family of Connie Wimmer by sending flowers.

We encourage you to share your most beloved memories of Connie here, so that the family and other loved ones can always see it. You can upload cherished photographs, or share your favorite stories, and can even comment on those shared by others.

Posted Jan 08, 2020 at 11:20am
Shannon, CJ & JL - Banjo extends our most heartfelt sympathies for your loss...Our thoughts are with you and your family during this difficult time.

Flowers were purchased for the family of Connie Wimmer. Send Flowers 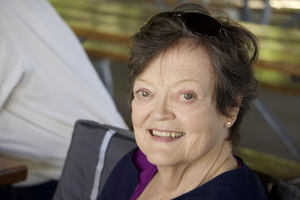