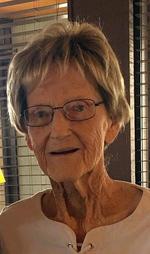 Delina Matz Christensen was born in Lodi, California on 12 September 1929 to first-generation German immigrant parents, Charles Richard and Emma Bender Matz. She was the third of four children and the youngest daughter. Her parents primarily spoke German in the home while the children responded in English. In her early twenties, she visited Utah where her sister lived and met McCoy Christensen. After many trips between Utah and California, the two were married in Minden, Nevada, on 4 September 1951. Delina joined the Church of Jesus Christ of Latter-day Saints in 1954, shortly after she and McCoy welcomed their first child. Delina and McCoy were sealed in the Salt Lake City LDS Temple on 15 March 1955. The couple had three children.

Delina worked as an inspector for Barbizon Clothing, but dedicated most of her life to her family as a homemaker. She learned to cook traditional German and Eastern European dishes at a young age and was renowned in her ward, neighborhood, and family as a masterful cook and baker. She was an exceptional hostess, and spent more than fifty years hosting family dinners and ward socials, indulging her guests in an abundance of homemade foods: delicious main dishes, enormous hot rolls, giant oatmeal raisin cookies, pumpkin pie, potato salad, pickles, and jams. She never let anyone leave her home hungry and was quick to offer food and drinks to every visitor.

Delina was reserved in public, but amongst her family and friends she was known to have a quick wit and wry sense of humor. She had loving relationships with her parents, siblings, and many cousins whom she visited frequently in northern California. She was a thoughtful neighbor. She was a dedicated wife, mother, grandmother, and great-grandmother. She loved to hold, hug, and spoil the children in her life. She instilled values of honesty and education for her children.

Delina was the last surviving member of her family of origin and of her generation in both her and her husband’s family. She was preceded in death by her parents, her husband McCoy, her siblings Viola, Lucille, and Leon, and great grandson Braeden. She is survived by her children Sandra Wilkes (George), Tamie Nelson (Ed), and Jeff Christensen (Markelle), fourteen grandchildren, and nineteen great-grandchildren who will miss her deeply.