To share your memory on the wall of DeVerl Humpherys, sign in using one of the following options:

Print
TO WATCH WEBCASTING CLICK ON "PHOTOS AND VIDEOS" TAB ABOVE.

At age 88, our beloved father passed away on March 23 in his home in Provo surrounded by all three of his children after a long ba... Read More
TO WATCH WEBCASTING CLICK ON "PHOTOS AND VIDEOS" TAB ABOVE.

At age 88, our beloved father passed away on March 23 in his home in Provo surrounded by all three of his children after a long battle with cancer. Many knew DeVerl as the first Electrical Engineering Professor hired by BYU in 1964, where he worked until retirement in 1995. Some will know him as the Y-Mountain Man due to his 300+ consecutive monthly hikes to the top of Y Mountain; a goal that took him 25 years to complete! Others recognize him from his many years of service working at the Provo LDS Temple; and some knew him as their “walking friend” due to his daily walks from home up to Mile High Drive and back.

DeVerl was a faithful member of The Church of Jesus Christ of Latter-day Saints who never wavered in his faith; endured until the end with a positive attitude and a smile on his face; and who always had a kind word for anyone he met.

We are sad to see our father go but are so happy that he is out of pain and is now with his brother Allan, sister La Fawn May, his mother & father and especially his beloved bride, Jacqueline Lees Henriksen who married him in the SLC Temple in 1958. All preceded him in death.

Services will be held at 11am on Saturday March 28th at the Nelson Family Mortuary. Due to Covid-19 the event will be attended only by those participating in the service. However, the service will be live streamed and made available for all to view. To watch the live stream and express condolences please visit www.NelsonMortuary.com
Read Less

Receive notifications about information and event scheduling for DeVerl

Consider providing a gift of comfort for the family of DeVerl Humpherys by sending flowers.

We encourage you to share your most beloved memories of DeVerl here, so that the family and other loved ones can always see it. You can upload cherished photographs, or share your favorite stories, and can even comment on those shared by others.

Posted May 08, 2020 at 01:32pm
I apologize for the double post but was unable to stream the video of the services until later. Thanks so much to all who participated and shared such heartfelt tributes to your father and friend. If a memorial service is planned in the future please let me know, if possible. I just wish I had known earlier of your father's passing, can not even begin to express the impact he had on my life. Fred McKeen
Comment Share
Share via:
FM

Posted May 08, 2020 at 11:35am
I am so sorry for your loss. Dr. Humpherys was quite literally an inspiration to me as a student and a guidepost for me throughout my career. He only provided encouragement and support while I was a student at BYU (BSEE, '82) and took great pride in my achievements throughout my career. When I would pass through Provo over the years I would visit Dr. Humpherys and without fail he would ask me about my family, my wife and children, as well as my engineering career. His ability to remind me of the priorities in my life were a tremendous blessing and I will be forever grateful for his influence in my life. I know this is true for countless students. Your father, friend and colleague's impact on the world will be eternal. Fred McKeen
Comment Share
Share via:

Posted Mar 29, 2020 at 10:42pm
We always thought DeVerl would live forever. Even at 80 he could out-hike any member of the Priest quorum. If there are mountains in Heaven, he is already climbing them.
Comment Share
Share via:

Posted Mar 28, 2020 at 02:39pm
As challenging as it must be for the Humpherys family to say goodbye to Deverl during this pandemic, one silver lining is that I got to watch the funeral from my home in San Diego. The service was beautiful and a wonderful tribute to a very good man. I feel privileged that Deverl was a leader of the young men when I was growing up in the Edgemont 6th ward. His fun sense of humor and love for the outdoors was very endearing to the youth. Thank you to Deverl's family for streaming such a wonderful tribute online.
Comment Share
Share via:
DS

Posted Mar 28, 2020 at 11:07am
So many wonderful adventures come to mind when I think of my dear friend DeVerl. My sympathies to everyone in the family. I am sure you will all miss this mighty pillar of strength as will I.
Comment Share
Share via: 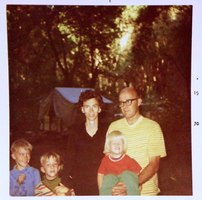 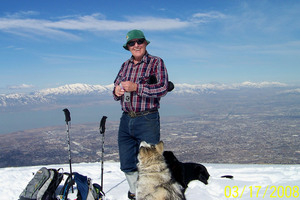