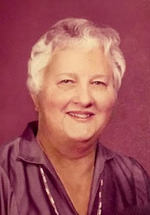 Our mom and grandmother, Ella Haynie Brothers passed away peacefully on the morning of Sunday, March 1, 2020. Ella was born on August 9, 1926 to Winfred Stover and Sara Cloe Rogers Haynie in Manassa, Colorado. She enjoyed a sweet country childhood with a close- knit family and dear friends. She loved to tell her grandkids about how she could ice skate for miles on the frozen river as a young girl.

Ella played clarinet in the high school band while her future sweetheart played trumpet. She became a cheerleader, cheering little Billy Brothers, her high school sweetheart, on to victory in basketball and football. Cheering him to victory in all his pursuits would become her lifelong legacy. She supported him through his WWII years in the U.S. Navy. Upon his return, Ella married that high school sweetheart, William S. Brothers in the Salt Lake Temple on August 29, 1946. Then, just a year later, she supported him again when he left her to serve a two year mission for The Church of Jesus Christ of Latter-Day Saints to the East Central States Mission. Her separation from her husband Bill for those two years was a difficult sacrifice for her as she loved him dearly. While waiting for her missionary husband to finish his mission, she finished her bachelor's degree in accounting from Utah State. From there she cheered Bill on through many years of schooling where Bill became a pharmacist as well as a medical doctor specializing in Dermatology. She kept the home fires burning for their little family during those long years of study and accomplishment. She supported his career as a Navy doctor to all of the places they were called by the Navy to serve. Upon retiring from 30 years in the Navy, they settled in Provo where Bill continued practicing medicine as a Dermatologist.

Ella served as a Bishop's wife three times and remembers seldom having him in the congregation with her and their six children. She suffered with arthritis, but still managed to raise her children well in spite of the pain she dealt with daily. She served in many church positions, but the one she loved best was playing piano for skits and road shows. She played by ear and so could play any accompaniment needed. You always knew when mom was playing the organ for church because it always had an extra helping of "pizazz" added in. Mom loved to crochet, and in her senior years crocheted over 100 afghans for family and friends. This gave her great joy! She was an avid reader with a special love for Church History. Up until her death at 93, she read her scriptures daily from her iPad and followed her family on Facebook. We always knew where she stood as to her belief in the Restoration of the Gospel. That belief was always present in our home and aided in the forming of our own testimonies. We will miss her dearly, but are excited for her reunion with those who have gone before. We love you mom!