To share your memory on the wall of Floyd Sampson, sign in using one of the following options:

Floyd Leroy Sampson was born in Delta, Utah, on January 12, 1944, while his father was away serving in World War II. Leroy was two by the time his father returned from war. The ... Read More
TO WATCH WEBCASTING CLICK ON "PHOTOS AND VIDEOS" TAB ABOVE

Floyd Leroy Sampson was born in Delta, Utah, on January 12, 1944, while his father was away serving in World War II. Leroy was two by the time his father returned from war. The first time Leroy met his father, his mother told him to “Go give Daddy a hug.” So Leroy ran over to a photograph of his father and gave it a great big hug.

Leroy was the oldest of Floyd and Edna Sampson’s three children. He has a sister, Jackie, and a baby brother, Kenny. He grew up in Las Vegas, Nevada, back when the booming metropolis consisted of four high schools. He had a love of baseball in his youth and played often.

After high school, he enlisted in the U.S. Army, where he helped to patrol areas near Germany’s Berlin Wall. One of the few times his children saw him really break down and cry was the day the Berlin Wall came down. He just kept saying, “You have no idea what this means.”

Leroy married Elizabeth Ellen Smith in Chula Vista, California, on March 7, 1970, and was sealed to her in the St. George Utah Temple of The Church of Jesus Christ of Latter-day Saints in 1972. He said of her that she was a “prized woman.”

Leroy worked at a mine in Eagle Mountain, California, as they began raising their family. Shortly after their fourth child was born, they moved to Mesa, Arizona, where Leroy ran his own company repairing shopping carts. In 1989 they moved their family to Portland, Oregon, where Ellen and Leroy stayed until 2007. They then moved to Stockton, Utah, where they lived until the passing of his sweet Ellen in 2015. Leroy returned to his boyhood town of Las Vegas, where he married a dear friend he had known nearly all of his life, Alicia Foutz, in 2016 in the Las Vegas Nevada Temple. Alicia provided much-needed companionship and support for the final years of his life.

Leroy is known by all as a very fun-loving man with a contagious laugh. He loved the youth and always asked the bishop to let him teach the hardest Sunday School class. He was known to take his Sunday School students driving around the church parking lot for good behavior in class.

He studied the scriptures often at the kitchen table, with a frequent, “Well, now listen to this.” He loved God and wanted his posterity to know and follow Him. Leroy was able to combine his love of the gospel of Jesus Christ along with his ability to connect well with others by serving a three-year mission with Ellen as a Salt Lake City Conference Center tour guide.

Leroy could sing a country song from start to finish knowing only about four of the actual words. He couldn’t resist boxes of California oranges, Utah peaches, and Oregon berries. He had a friend at every fruit stand. But, let’s be honest, he had a friend on every corner. This man did not know a stranger, and everyone loved his stories. He always said, “I never let the truth get in the way of a good story.” He lived to help others. He was a champion of the underdog and could talk with anyone about anything.

He loved to fish and was always ready to spend time with a fishing buddy. He spoiled his daughters and expected chivalry from his sons. He played the donkey in annual nativity scenes and had his family rolling with laughter when gathered for family prayers. He never spent a day in college but wouldn’t expect anything less than higher education for his children.

He taught his children to love God, honor their mother, reverence their freedom, and value an education. He spoiled and loved his grandchildren in a way that ran circles around other grandpas. Ellen often said, “As soon as the grandkids hit about age two, all they want is their grandpa.”

Leroy returned to his heavenly home on April 10, 2020. He was living in Las Vegas, Nevada, at the time of his passing. He is preceded in death by his parents and first wife, Elizabeth Ellen. He is survived by his second wife, Alicia Foutz; by children David (Tiffany) Sampson, Kevin (Jennifer) Sampson, Kristi (Carl) Rosengreen, and Katie (Marc) Steed; and by grandchildren Raelynn (Austin), Sydney, Austin, Jaemynn, Kylie, Hailey (Ramon), Melia, Braden, Lucy, David, and Vivian.

Leroy will be laid to rest at the Stockton Utah Cemetery on April 18, 2020. Due to safety concerns related to the Coronavirus outbreak, the services are being held privately by the family on April 18th at 11:00am, but to participate via livestream, please visit the link below or click on the tab "Photos and Videos" above:

Receive notifications about information and event scheduling for Floyd

Consider providing a gift of comfort for the family of Floyd Sampson by sending flowers.

We encourage you to share your most beloved memories of Floyd here, so that the family and other loved ones can always see it. You can upload cherished photographs, or share your favorite stories, and can even comment on those shared by others.

Posted Apr 18, 2020 at 02:55pm
This past week I have been thinking about what a wonderful Uncle Leroy was to me. I am so grateful he was able to bless Joshua, Jared and James. He and Aunt Ellen were such an example to Dale and myself. I have a fond memory of him when Jared was born and in the NICU. He came into town for business and after a brief visit he said okay let's get you to the hospital to see your son. I said I had no one to watch Joshua since everyone had gone back to work and could only see him in the evening. He commented
" what I am chopped liver I can do that for you, so you can see you son." So not only did he drive me there since I still couldn't drive he spoiled Joshua while I enjoyed Jared. I will always love and miss Uncle Leroy and Aunt Ellen, but know they are again happy together. Much Love to the Sampson, Rosengreen & Steed families. Love Dale & Sheila Barriner
Comment Share
Share via:

Posted Apr 18, 2020 at 12:42pm
I will miss both Leroy and Ellen tremendously. Now that they are together I know that all is right with the world. And maybe I won't get blamed for everything that goes wrong anymore. ;) Love and comfort to the Sampson children. Aunt Janine
Comment Share
Share via:
MH

Posted Apr 16, 2020 at 01:52pm
Katie, I really enjoyed reading about your precious Father. He is an amazing person. Note, I say "is." With all the energy and joy for living he had in this life, he takes all of that to the other side. I can only speak to one of his life's biggest contributions ----you! Like Tina, I also see so many of your Father's amazing traits in you. Katie, know that you are loved ---and during this time of sadness and letting go of your Father in this life, know that he is with loved ones on the other side. I loved seeing his picture and reading his obituary. What an amazing Father and what great gifts and loving support he provided to his family and friends in this life, making it much more painful as you grieve his passing.
Comment Share
Share via:

Posted Apr 16, 2020 at 12:00pm
I only met your father about twice, Katie, but immediately I could tell he was full of life and he liberally shared his enthusiasm for life with others. I see many of his qualities in you - having an enduring love of learning, helping the disadvantaged, having a positive outlook on life, among others. The world has been blessed by Leroy's presence and legacy.
Comment Share
Share via:
HY

Posted Apr 15, 2020 at 10:42pm
Uncle Leroy had the most contagious laugh. Going to visit your family was some of the best vacations we ever had. We all learned Fill or Bust at your place in Beaverton. I will never forget the feeling I had when I was doing well with the dice and he wouldn't let me stop. The encouragement and giggles from him, it was the best. Absolutely thrilled that I got to love him in my life
Comment Share
Share via: 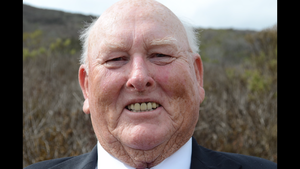