To share your memory on the wall of Gail Metcalf, sign in using one of the following options:

Provide comfort for the family of Gail Metcalf with a meaningful gesture of sympathy.

Gail was born on March 5, 1928 in Lakewood, Ohio to William Allen Hughes and Gladys Lavern Garner. She grew up as an only child, since her older brother lived only twelve hours. Her father disappeared when Gail was about five years old, which forced her mother to work several jobs, so she was basically raised by her grandmother Jennie Mae Weldon.

Gail and Bob were married in Salt Lake City, Utah on December 1, 1944. They are the parents of three children: Gladys Elaine (Lainy) born in Ohio plus Jennifer Lee and Robert Alan both born in California. Gail is survived by 17 grandchildren, 38 great-grandchildren and 13 great-great-grandchildren.

Gail and Bob’s lives centered around their family, the Church and music. It was music that brought them together, they both sang with the Southern California Mormon Quoir for many years, Gail led music at church, and they both sang duets together at church. Gail also got much joy from performing and directing shows (mostly musicals) for the Church and in the community.

Gail served in many callings in the Church but seemed most happy when serving missions with Bob. They served five missions, almost consecutively, from February 1987 through April 1997. They served three years at the Provo MTC then left immediately for a mission to the Nauvoo Visitors’ Center, where after six months they transferred to Tucson, Arizona. After a six-month vacation they were called to a mission in Truth or Consequences, New Mexico for a year. After another six-month break they went back to the Provo MTC for 3½ years.

Gail has rejoined Bob and they both expressed (at the time of their respective deaths) a desire to be in the Lord’s missionary forces in the spirit world.

The family thanks CNS Hospice for its compassionate support. Friends are invited to join the family in a celebration of Gail’s life in Provo either on Friday, January 25 from 6-8 pm with a viewing at Nelson Family Mortuary located at 4780 N. University Avenue; or on Saturday, January 26 at the Edgemont 9th Ward building, located at 4300 N. Canyon Road, where a viewing will be held from noon to 12:45 pm with funeral services following at 1 pm.

Interment at the Springville Evergreen Cemetery located at 1997 S. 400 E., Springville, about 2:45 pm. In lieu of flowers, please consider a donation to one of Gail’s favorite charities: the LDS Humanitarian Fund, or Operation Underground Railroad at my.ourrescue.org.
Read Less

Receive notifications about information and event scheduling for Gail

Consider providing a gift of comfort for the family of Gail Metcalf by sending flowers.

We encourage you to share your most beloved memories of Gail here, so that the family and other loved ones can always see it. You can upload cherished photographs, or share your favorite stories, and can even comment on those shared by others.

Posted Jan 26, 2019 at 11:27am
Grammy was by far one of the most beautiful souls to ever bless my life. And she absolutely did, bless it! She was an amazing example of grace and genuine Christ-like love and compassion. An incomparable spiritual force to be reckoned with. Some of my last words to her just a couple days before her passing were, "I want to be just like you when I 'grow up'." Those are big footsteps to follow in, but just like dozens of others either born or loved into her posterity, I have a great roadmap.
While I would love to see that warm smile that filled the room, and hear that giggle of hers when she walks into a room or sits and visits with her loved ones, I refuse to grieve or feel sadness; Grammy is exactly where she wanted to be - with Grandpa and her Heavenly Father in Heaven. During a visit this summer, she very bluntly shared that she couldn't wait until her time came, and that all she wanted was to be with Grandpa again. She wouldn't want us mourning. I think she'd want us celebrating her life and reunion with her love. I hope she and grandpa are dancing their best jig today. ❤
Comment Share
Share via:
D

Posted Jan 23, 2019 at 02:52pm
To a life well lived and a beautiful soul. I will miss you Grandma Gail. With much love and deepest sympathy to those that survived her, 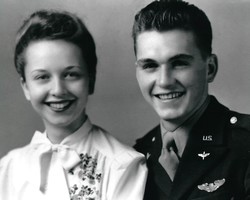 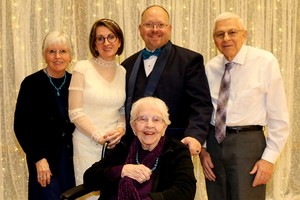