To share your memory on the wall of Gerald McKell, sign in using one of the following options:

Print
G. David McKell, Jr. passed away on the evening of December 6, 2019. He had been living for several years with a gradually progressive form of dementia and ultimately died of a broken heart following the death of his sweet and loving wife just 4 week... Read More
G. David McKell, Jr. passed away on the evening of December 6, 2019. He had been living for several years with a gradually progressive form of dementia and ultimately died of a broken heart following the death of his sweet and loving wife just 4 weeks prior. They are now happily and eternally reunited. Dave was born on March 11, 1934 in Klamath Falls, Oregon to Gerald David McKell and Pattie Christine Woodward. He grew up a short distance away in the small logging town of Chiloquin where his father worked at the lumber mill. He was the only son and had two older sisters who adored him and spoiled him throughout his childhood and teen-age years. After high school Dave joined the U.S. Army and spent about 20 months in Korea at the time of the Korean War. When he returned he chose to serve a full-time mission for the Church of Jesus Christ of Latter-day Saints in the West Central States Mission. Upon returning from his mission he attended Brigham Young University. While at BYU he played the clarinet in the school’s symphony orchestra and concert band. He also met and married Marilyn Swensen and together they had 5 children: Mark, Scott, Anne, John, and Kristen. They were later divorced. On November 18,1978 Dave married Kathryn Roberts King welcoming her and her two sons, Zachary and Benjamin, into the family. In May of 1981 the youngest of Dave’s children, Joshua David, was born. Dave graduated from The University of Oregon Dental School in 1965 and returned to Provo, Utah where he started a dental practice in family dentistry which grew and thrived for 35 years. He took great personal interest in his patients and staff. He considered all of them his friends and consistently tried to treat them as such. Family was of paramount importance to Dave. He went to great effort to take the time to make family memories with summer trips to Lake Powell, camping at Diamond Fork and Soapstone campgrounds, and weekends riding motorcycles out on the west desert. As the family grew, kids got married, and grandkids came along he made sure all could enjoy the adventures of Lake Powell by buying a share in a houseboat. All of the kids and most of the grandkids remember the week spent on the houseboat every summer with fondness. They also remember going out and cutting Christmas trees every winter and sitting around the fire eating soup, drinking hot chocolate, and roasting marshmallows. There was never any question in the minds of his children of just how much he loved them and loved spending time with them. Dave was simply but firmly dedicated to the gospel of Jesus Christ and spent a life of service in the church. He was a dedicated home teacher, scoutmaster, and young men’s leader/advisor. He also served as a counselor in the bishopric and on a BYU stake high council. After retirement from dentistry, he and Kathee served a mission in the Dominican Republic and grew to love those people deeply and developed a kinship of sorts with the Dominicans. Most of all, he was a tremendous example of a quietly generous disciple of Jesus Christ. He consistently gave of his time, skills, and abilities for the benefit of others, especially the less fortunate, and never sought recognition or accolades in return. His example has influenced and will continue to influence generations of his posterity. His heart was broken and he was inconsolable after the death of his dear wife Kathryn just 4 weeks prior from cancer. While we are saddened by the loss of both of them, we are very joyful in the knowledge that they are united again eternally and that their time apart was so short. He is survived by all of the children and their spouses (Mark & Lisa, Scott & Tonya, Anne & Todd Bailey, John & DeAnna, Kristen & John Strong, Josh & Mallory, Zachary & Jennifer King, and Benjamin & Stacey King) along with 30 grandchildren and 12 great-grandchildren. A viewing/celebration of his life will be held on Thursday, December 12, 2019 from 7-9pm at the Nelson Family Mortuary, 4780 N. University Avenue in Provo. The funeral will be held on Friday, December 13, 2019 at 11:00am in the Sharon East Stake Center, 2400 N. 1060 E. in Provo. A viewing will be held prior to the funeral from 10-10:45am at the stake center. Dave will be laid to rest at the Eastlawn Memorial Cemetery in Provo. Condolences may be sent to www.nelsonmortuary.com.
Read Less

Consider providing a gift of comfort for the family of Gerald McKell by sending flowers.

We encourage you to share your most beloved memories of Gerald here, so that the family and other loved ones can always see it. You can upload cherished photographs, or share your favorite stories, and can even comment on those shared by others.

Posted Dec 10, 2019 at 06:58pm
So sorry for the Loss of your Dad, Grandpa & Great Grandpa. Dr. McKell was our Family Dentist for years! We Loved him & he will be missed.
Comment Share
Share via: 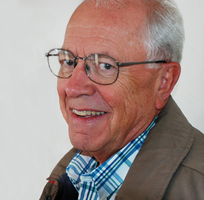