To share your memory on the wall of Howard Adamson, sign in using one of the following options:

He was a devoted member of the Church of Jesus Christ of Latter-Day Saints. He served in many ward and stake callings. He was a temple worker and served in the Provo and Manti Temples for many years. He also had the opportunity for one summer to be a guide at the Paris Idaho Tabernacle.

He loved playing his Trumpet and played in Howard Nelson’s Orchestra in the 1940’s. He later served as Chief of Police for the city of Alpine, Utah. He was a tenor in the well-known Alpine Quartet that performed for many decades; He also was the Alpine Day’s Band Director for many years.

We want to thank the staff at Bel Aire Senior Living Center for their loving care and support for Howard and his family. Thanks to Brio Hospice for their special care.

Howard was greatly loved and will be missed by many friends and relatives that knew and loved him.
We love you Dad!!

To watch the graveside services please click on the link below:
https://youtu.be/oMlQbfgUyQQ
Read Less

Receive notifications about information and event scheduling for Howard

We encourage you to share your most beloved memories of Howard here, so that the family and other loved ones can always see it. You can upload cherished photographs, or share your favorite stories, and can even comment on those shared by others. 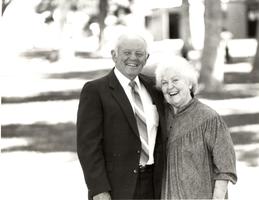