To share your memory on the wall of JoAnn Dew, sign in using one of the following options:

Print
TO WATCH WEBCASTING CLICK ON "PHOTOS & VIDEOS" TAB ABOVE, IF ON A CELL PHONE SCROLL TO BOTTOM.

On the morning of June 19, 2020, our beloved wife, mother, grandmother, great-grandmother, sister and friend to everyone she met â€śgraduatedâ... Read More
TO WATCH WEBCASTING CLICK ON "PHOTOS & VIDEOS" TAB ABOVE, IF ON A CELL PHONE SCROLL TO BOTTOM.

On the morning of June 19, 2020, our beloved wife, mother, grandmother, great-grandmother, sister and friend to everyone she met â€śgraduatedâ€ť from mortality and returned to her Heavenly Father.

JoAnn Petersen Dew was a bright, thoughtful, funny, loving, utterly selfless woman who was a pure ray of sunshine, an example of sheer goodness to all, and the best back-tickler and story reader on record. It is not an overstatement to say that everyone who met JoAnn loved her, felt comfortable in her presence, and almost instantly counted her as a friend.

Born in Hyrum, Utah, on January 6, 1932, to George Raymond and Mabel Matilda Nuttall Petersen, she succumbed after a long, slow decline related to a fall three years earlier.

JoAnn spent most of her growing-up years in Logan, Utah. She was working as a switchboard operator at the local telephone company when a Kansas farm boy attending what was then the Utah State Agricultural Collegeâ€”Charles M. Dewâ€”somehow persuaded this young, red-headed beauty to marry him. They were sealed for time and all eternity in the Logan Utah Temple on February 6, 1953, and then left Utahâ€™s lush Cache Valley for a move to the Sunflower State. There in their little house on the prairie, they raised five childrenâ€”Sheri Linn, Charles Steven, Cynthia Jo Pennington, Linda Michelle Baer, and Bradley Raymond.

JoAnn and Charles were devout members of The Church of Jesus Christ of Latter- Day Saints, and their membership in the Church and devotion to the Savior, along with chore of running their large grain farm, shaped their lives. JoAnn served in an endless number of Church callings in the Primary, Relief Society, Young Women and Seminary organizationsâ€”and, as is often the cases in small units of the Church, often many at one time. She drove hundreds of thousands of miles across the Great Plains chauffeuring her children to football and basketball games, track meets, music recitals, youth conferences and girlsâ€™ camps, and basically anything and everything that would give her children opportunities to participate, learn, and grow. She gave her life to her children. No effort was too great to give them experiences that allowed them to develop their talents. To her childrenâ€™s chagrin, she had an obsession with not just being on time but WAY early to every meeting and event they attended.

In their later years, JoAnn and Charles served two missions for the Church in Nauvoo, and she loved every minute leading tours through Church historic sites, serving in the Nauvoo Temple, and joining the young performing elders and sisters in their evening performances overlooking the banks of the Mississippi. She and Charles made treasured friendships with countless other senior couples.

The gospel and her family meant everything to JoAnn.

She is survived by her children: Sheri, Cindy Pennington (James), Michelle Baer (Michael), and Brad (Lisa); by Sandra Gardner, the widow of deceased son Steven, who is now married to Richard Gardner; by fifteen grandchildren; and by thirty-three great-grandchildren.

She was preceded in death by her husband Charles Milton and her eldest son Charles Steven; by two grandchildren, Tanner and Amanda Pennington; and by four great-grandchildren--Gaige Charles Dew, Lyndon Wilson, Bridger Baer, and Harlow Dew.

We love you, mother, and pledge to follow in your footsteps and make you proud of us! We cherish our Heavenly Fatherâ€™s Plan, which assures us that in a coming day, we will be reunited with you and dad!

**We express deepest gratitude to the dedicated and caring professionals at the Legacy Village assisted-living center in Provo, Utah and to those who served mother in her last weeks from First Choice Home Health and Hospice. We also thank Dr. Dave Workman for the tremendous loving care he gave our mother.
Read Less

Receive notifications about information and event scheduling for JoAnn

Consider providing a gift of comfort for the family of JoAnn Dew by sending flowers.

We encourage you to share your most beloved memories of JoAnn here, so that the family and other loved ones can always see it. You can upload cherished photographs, or share your favorite stories, and can even comment on those shared by others.

Posted Jun 30, 2020 at 01:18pm
Dear Shari,
I was saddened to learn of the passing of your faithful mother. While I didn't know her, I know her remarkable daughter Shari. Through the powerful stories of growing up that you have related in your various inspiring talks, I have had a small peek into the wonderful woman and mother she was. I am personally lifted and encouraged by the lives and example of valiant women such as your mother. Thank you for what you have shared of her with all of us.
May the comforting influence of the Holy Ghost embrace you as you bid a temporary farewell to your dear mother and may you be blessed as you carry on in the great work and influence of your life.
With love,
Marilou D. Myers
Comment Share
Share via:
BR

Posted Jun 25, 2020 at 04:58pm
Sheri and Cindy,
May you be richly blessed with comfort and the spirit of peace at this time. What a great, wonderful woman she is. I was privileged to meet her at the Denver Temple, and admired her and other Branch members for making that very long trek from Ulysses to the Temple. So grateful for the knowledge that she is not far from you.
Safety to you in travelling to Kansas.

Posted Jun 20, 2020 at 07:22pm
We offer our heartfelt condolences to the family of JoAnn Dew. She was a wonderful neighbor and friend and she will be greatly missed. We know she is with her family on the other side of the veil and wish we could view that reunion. She is again happy and no longer suffering with the frailties of life, but we will miss her. She was a strong, gracious, devoted woman and we are better for having know her. Hugs to all her family. We know because of the pandemic, things are not like they wanted them to be. You are in our thoughts and prayers. Thank you for sharing the life of this wonderful woman with us.
Love,
The Badger Family
Comment Share
Share via: 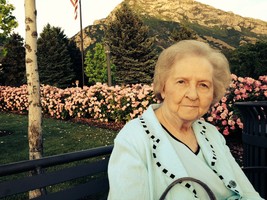