To share your memory on the wall of Jordan Nelson, sign in using one of the following options:

Print
Jordan Andrew Nelson, died unexpectedly in Provo, Utah on March 3, 2020, at the young age of 51. Jordan lived with health problems related to diabetes for many years and we feel at peace knowing he is now free from his physical ailments.

Jordan Andrew Nelson, died unexpectedly in Provo, Utah on March 3, 2020, at the young age of 51. Jordan lived with health problems related to diabetes for many years and we feel at peace knowing he is now free from his physical ailments.

Jordan was born on June 30, 1968, in Provo, Utah to Marvin Nels Nelson and Renee Cheney Nelson. He was the youngest of 5 handsome Nelson brothers who spent many years making wonderful memories together in the foothills of Provo. Jordan graduated from Timpview High School in 1986 and then furthered his education at Utah State, where he graduated with a Bachelor’s in Business Administration.
At a young age, Jordan assisted his brothers in maintaining and managing the grounds and tram of Bridal Veil Falls in Provo Canyon. It was at Bridal Veil, in 1989, that he met his sweetheart, Stephanie Odle. They married in 1992 and just recently divorced in 2019.

Jordan’s greatest pride and joy arrived in 1999 when his beautiful miracle daughter was born. McKenzie was his life and he made it his priority to love and protect her. He could most often be found watching movies or playing video games with McKenzie and their time together meant everything to him. Jordan will be remembered for the amazing father he was and his dedication to his “Angel.”

Jordan was preceded in death by his parents, Marvin and Renee and niece, Alexis Nelson. He is survived by his daughter McKenzie, brothers Vincent (Karen), Kline (Marina), Nate (Wendie), and Gavin (Linda) Nelson along with many nephews and nieces.

A graveside service will be held at 12:00 pm on Saturday, March 14, 2020 at East Lawn Memorial Hills Cemetery (4800 N. 650 E., Provo). Family and friends are invited to attend. To express condolences www.NelsonMortuary.com

Receive notifications about information and event scheduling for Jordan

Consider providing a gift of comfort for the family of Jordan Nelson by sending flowers.

We encourage you to share your most beloved memories of Jordan here, so that the family and other loved ones can always see it. You can upload cherished photographs, or share your favorite stories, and can even comment on those shared by others.

Posted Mar 07, 2020 at 02:31am
My good friend Jordan Nelson passed away suddenly and unexpectedly this week. From high school into adulthood, our friendship is constant. Heartbroken and saddened at his passing, I am also grateful for all the good times I have enjoyed with Jordan. What a kind-hearted, cheerful, and giving man. I know he is with his loving parents and other loved ones. Until we meet again, my dear friend.
Sam Hammond
Comment Share
Share via: 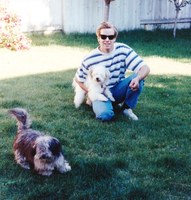