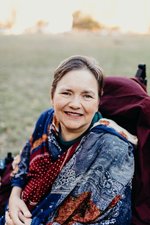 Karen Lund Page passed away on June 9th, 2020 at the age of 59 due to complications from a longstanding autoimmune disorder. Karen was born in Arcadia, California on December 13th, 1960 to Marilynn Marlett Lund and William Stirling Lund. She married James Brent Page in Manti, Utah in 1986 after five years of courtship, having bonded over their mutual love of river rafting.

As a young woman, Karen was unsure about having children. She would often joke that she wanted no kids and Jim wanted four, so they compromised by having five. Karen’s children became her greatest joy. She was an involved mother, leading scout troops, organizing arts and crafts, and bringing them on adventures around the country and the world. Karen had more than enough love to go around, and she curated an extended family of strays and misfits throughout her life.

When Karen was 49, she became ill with a debilitating illness that quickly stripped her of her hearing and her ability to walk, among other things. Nevertheless, Karen fought valiantly to stay with her children as long as she could, staving off infection and disease for ten heroic years. She remained joyful and loving to the end, and expressed joy and comfort that she would soon leave her ravaged body for the next and greatest adventure.

Karen was preceded in death by her mother, Marilynn, her father, William, her sister, Victoria, and her husband, James. She is survived by her children, Hannah (Devin) Bell, Esther, Richard, Rebekah, and Jennie, and one granddaughter, Cora Bell, her siblings, sister-in-law, and a collection of cousins, nieces, and nephews.