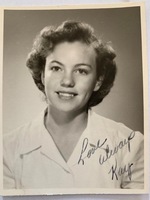 TO WATCH WEBCASTING CLICK ON "PHOTOS AND VIDEOS" TAB ABOVE, IF ON A CELL PHONE SCROLL TO THE BOTTOM.

Kay Loree Peterson returned to her Heavenly Father and rejoined her husband Cecil Loyd Cavender, Jr. on the 1st of December, 2020 at the age of 87 in South Jordan Utah. She passed away peacefully in her sleep. The funeral service will be held at the Camp Williams Veterans Cemetery in Bluffdale, Utah, on Thursday, December 10th, at 2:00pm. Due to the current pandemic, services will be invitation only for family members, but will also be made available on the Nelson Family Mortuary website for live viewing, as well as recorded for later.

Kay was born on the 17th of September, 1933 in Benson, Arizona, to Leonel Chester Peterson and Blanche Mary Wear, who were living in nearby St. David. They raised three children, Dorothy May, Daniel Lee, and Donald Loyd.

Kay and Bud joined the Church of Jesus Christ of Latter-Day Saints while living in Yuma and were sealed for time and all eternity to their family.

Kay grew up in southern Arizona, including Miami, and then Tucson. She graduated from Tucson High School in 195. Kay met and married Cecil Loyd Cavender Jr. on July 3, 1942 in Tucson, Arizona. He was discharged from the Navy and worked for Mountain Bell in Tucson until 1956 when he rejoined the Navy. During this time Kay gave birth to their daughter Dorothy in 1953. Kay became a Navy wife and their travels began. Daniel was born on February 3, 1958 in Seattle and Don was born in Saigon (now Ho Chi Minh City), Vietnam.

Bud was assigned to Saigon in 1962 and Kay and the family joined him there. Kay was one of the few American women to give birth in Saigon and she served as the Primary President of the LDS Church Servicemen's Group that Bud led. The family lived first in an apartment in Saigon and later in a small home in Cholon. Kay and the children left for the US until 1964. Kay became adept at traveling in local vehicles and shopping at the open-air markets, ordering local clothing. Attendance at church meetings often involved priesthood leaders offering the sacrament in flight suits. Often Kay hosted members of the Servicemen's Group at her home and other meeting places.

When Bud was at sea, Mom was in charge. The family lived in various types of mostly military housing in Seattle, Washington; Yuma, Arizona; Waipahu, Saigon; Hawaii; Keyport, Washington and Arlington, Virginia. Sometimes when Bud was at sea for long periods of time Kay and the kids lived with her mother and grandmother in a cute little house in Pomona, California.

After Bud retired from the Navy the family moved back to Tucson and he returned to work at Mountain States Telephone Company, while Kay began working as at a bank. She worked at several banks or credit unions during her life. Kay began to work for the phone company and they both were transferred to Utah in 1978. Bud retired in 1988 and Kay retired in 1994.

Kay expanded her interest in Genealogy and wrote a book with her Sister in Law Mary L. Peterson in 2001 titled Charles Sreeve Peterson Ancestors and Descendants.

Kay and Bud also lived in Sierra Vista, Arizona, where she worked as a receptionist for her son Dan's FBI office. When both Dan and Don were transferred to Virginia, Kay and Bud moved there. Kay served as a Director of a Family History Center for the LDS church. Kay and Bud later moved to Utah, living in Lindon, Murray, West Jordan and South Jordan, Utah. Kay and Bud both died at Daybreak Residential Community, where they both died. Kay died 5 months after Bud.

Kay is preceded in death by her loving husband Cecil, her parents, sister Verda Blanche Inscho, and brothers Leonel Fred Peterson, Heber Bruce Peterson, Alan Raymond Peterson and Merlin W. Peterson. Kay is survived by their daughter Dorothy Horan and her husband John; and sons, Daniel Lee and his wife Linda; and Donald Lloyd and his wife Cheryl, and their families. Kay is the grandmother of 11 grandchildren, 20 great grandchildren, and even 3 great-great grandchildren. Kay will be remembered for her smile, her love of her family and friends, her knowledge of genealogy and many contributions to FamilySearch. We are sure that she was welcomed by Bud and many others as she left this life.

Kay's family wishes to thank the staff of Sagewood at Daybreak, who spent many hours with Kay and gave her great care, especially after Bud passed away in July. Kay loved to attend Book Club, and play cards and Bingo with her friends. She was very grateful for the friendship and care of the Sagewood staff. We also want to thank Brio Home Health & Hospice, who also cared for Kay in her last days. Additionally, thank you to all who have sent family condolences.