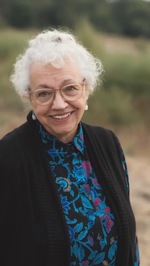 TO WATCH WEBCAST CLICK ON "PHOTOS & VIDEOS" TAB: If on a cell phone scroll to the bottom.

A life well lived by Kay Elton came to a peaceful and gentle ending while surrounded by family in Meridian, Idaho on Wednesday, May 6th, 2020.

The beloved wife of Michael David Elton (1934-2016), Kay Frances Strong Elton fought a long and brave battle with cancer. As her close-knit family stood by, singing a hymn from her church (LDS), Kay took her last breath while holding the warm hands of her daughters.

Kay Frances Strong was born on July 15, 1939 in Livingston, Montana. The daughter of George and Glena Strong, Kay was a bright and industrious child known for her spunky energy, a bright mind and prodigious talent in music at both singing and piano. Growing up in the Seattle area, helping her parents run a small grocery store, Kay graduated from high school and went on to U.W. and Western Washington University, where she met her soul mate, Michael David Elton, who was then serving a mission for the Church of Jesus Christ of Latter-Day Saints (LDS). After returning home from his mission to his hometown of Palo Alto, California, Mike kept in touch through the US mail and the two fell in love. Married in 1959, Kay worked at Stanford Research Institute (now the Hoover Institution, think tank) while helping Mike to finish his college degree. Not long after, the first of what eventually came to 9 children were born and the Elton family was established.

Kay and Mike moved north to Portland, Oregon in 1967, ultimately settling in Lake Oswego a few years later, next door to Lakeridge High School, where Kay raised her big and happy family. Throughout her life, Kay was active in politics, starting with having her children volunteering at voting stations in the 1970s, helping to gather and deliver ballots on those cold and wet Oregon election nights in November. She kept a close eye on world news and was an avid follower of Fox News where her favorite was Bill O'Reilly.

Kay was an amazing woman who was loved by all who knew her. She was a spark plug of boundless energy who was known for her generous nature and her unrivaled and gritty determination. An avid non-smoker, as the story goes, which Mike loved to tell....once at a restaurant in the mid-70s, Kay noticed a burly and tattooed truck driver was smoking nearby and she got that fearless and determined look in her eye. Known to carry a small hand-held 9-volt battery operated fan, Kay took the fan to the man and held it to close to his face, boldly asking him about secondhand smoke and how it affected children. Somehow, Kay and Mike eluded the smoking truck driver and the legend of Kay Elton was formed. Kay was known to have a very strong sense of moral character and she brought up her children to have the same high moral fortitude. She never backed down and was not one to shrink from a confrontation. She had a very brave heart.

Kay loved to watch wildlife, namely birds and squirrels. You could often find numerous bird feeders in her backyard, well stocked for various wildlife to come and enjoy. Especially hummingbirds. Kay Elton also had a green thumb and became quite skilled at growing cherry tomatoes, snap peas and massive zucchini. She built a unique above ground garden in Lake Oswego that was ahead of its time in 1981 and still stands today, where the family spent almost three decades.


Kay was a lover of music and often whistled her way through the day with her effervescent and upbeat energy, always with a cheery disposition. She was a standout singer in the church choir. Her hand-eye coordination was incredible as she could play intricate and fast paced staccato Chopin. She could accurately type 100 words per minute or more on her Smith Corona typewriter, which sounded like a machine gun when her fingers were flying. Her eye for detail and precision was a staple of her writings and her verbal skill.

Without a doubt, if any one thing could define Kay Elton, it was her belief in Jesus Christ and in the Church of Jesus Christ of Latter-Day Saints. The absolute focus on family was something Kay felt was a foundational rock in her life and her home always had the saying "Families Are Forever" high on a wall or embroidered into a pillow on the couch. Kay felt deeply that those who had success in life should share with those who needed help...and she showed this during and throughout her whole life. Her children fondly recall secret deliveries of groceries to recently immigrated Russian families. Not to mention her love for foreign exchange students from abroad who shared the Elton home, alongside native American Indians from Montana who also lived with and as a part of the Elton Family. Kay always loved a big family and she made sure that everyone felt a part of a family unit that thrived upon their cultural diversity.

Kay Elton had a very big, soulful heart and she made life better for not just her family, but the community around her. She will be remembered forever in the hearts and minds of those who knew her kind, loving and generous heart. Her eyes sparkled with honesty and her life was lived with tenderness and integrity. Her legacy lives on in her children, the 37 grandchildren and the 8 great grandchildren, one of whom arrived less than two weeks ago. Kay was fond of ending her letters and phone calls with the saying "You Are Loved". It was something we always knew because we could always feel her majestic love. Kay Elton shall live on through time and all eternity through her family.