To share your memory on the wall of Kenneth Palmer, sign in using one of the following options:

Provide comfort for the family of Kenneth Palmer with a meaningful gesture of sympathy.

Ken is the oldest of three boys in the Palmer family. All of the boys were involved in sports from the time they were old enough to walk and throw a ball. He was a natural athlete and excelled in all the high school sports and eventually led his high school football team to a state championship as their quarterback.
After graduation from Bloomfield High School, Ken attended Brigham Young University. He ma-jored in political science and philosophy with the idea of attending law school. But as he worked his way through college by managing a restaurant and later a copy center, he decided to get his master’s degree in business.
During his first year of the MBA program, he met Denise Stephenson. He always said that “she chased me until I caught her”. They dated for two years and after he graduated, they became en-gaged and were married on December 20th, 1975. They have loved their life together and shared many hobbies. They enjoyed traveling, golf, scuba diving and BYU sports. Ken enjoyed his time in the business world and worked for several companies in the manufacturing field. After a time as a management consultant for Touche Ross, he worked for Everest & Jennings, Paragon Precision Products and then for Stryker Corporation. These companies took the family to southern California, South Africa and Kalamazoo Michigan. After leaving Stryker, Ken helped start Magleby’s Fresh res-taurants in Utah and the family moved to Provo in 2000.

Ken was not raised in a home where the gospel was taught, but developed a strong testimony be-cause of his life experiences. He served in many callings in the Church of Jesus Christ of Latter Day Saints. He was most recently serving on the High Council of a Young Single Adult stake where he loved interacting with the young people there. When Ken was diagnosed with glioblastoma, his deep faith helped him to look forward to the adventure ahead in the next life. His biggest regret about dying was leaving Denise behind. He would often say he hated the word “widow”.

Ken and Denise are the parents of 6 children and 21 grandchildren. He dearly loved his family and would visit them as often as he had a chance. Even when he was not feeling well, he wanted to be with them. The children and their spouses are Jamie and Andy Marinos, Alisa and Matt Fogt, Bekah and Jim Blankinship, Brian and Colleen Palmer, Shalane and Dan Brower, and Jay and Megan Heath. He hopes that his greatest legacy to his family will be the way he faithfully endured to the end.

Funeral services for Ken will be held at 11:00 am Saturday, December 29th at the chapel located at 4220 Foothill Dr., Provo. In lieu of flowers, the family asks that you consider making a donation to the charity of your choice, or to the Huntsman Cancer Center in Ken’s memory.
Read Less

Consider providing a gift of comfort for the family of Kenneth Palmer by sending flowers.

We encourage you to share your most beloved memories of Kenneth here, so that the family and other loved ones can always see it. You can upload cherished photographs, or share your favorite stories, and can even comment on those shared by others.

Posted Dec 28, 2018 at 04:32pm
Our Hearts go out to you Dense! We are all here for you and always will be. We love you! RCC LADIES GOLF ASSOCIATION

Posted Dec 25, 2018 at 08:58am
Please accept our sincere condolences and prayers of peace and comfort. Ken is a true hero and inspiration in our lives.

Posted Dec 24, 2018 at 09:36pm
I've known Ken since 1958. We were the same age and he lived right across the street. I remember summer days playing everything from baseball to croquet. We waited for the school bus together, we played all the kids games together. We went on adventures in the rocky hills near our neighborhood together. Tank Hill was just behind our houses and in the summer we built forts and had clod fights. In the winter we rode our sleds down the hill. We always had a large fire on top to warm us up. Our neighborhood was surrounded with a small golf course and we would sleep out on it on summer evenings. The Palmers sold Creamland products from their garage so we always had chocolate milk or rootbeer pop sickles to make the sleepouts better. We would put our sleeping bags on the green and wait til it got dark. Then we would go sneaking around the houses looking for adventure. Sometimes the girls would be sleeping out in someone's yard and we'd sneak up on them and annoy them. When it got late we retired back to our sleeping bags and talked about the things boys talk about til the wee hours. By the time we got to Jr High Ken was making a name for himself in sports. I settled for class clown. He was good in all sports and did well with his studies. He was always popular and a fine looking fellow. I could go on for hours with boyhood memories of our youth. Eventually we grew up and moved on with our lives. Dang it! I had only seen Ken a few times in the last 50 years, that's the way life goes. We had a couple of reunions the last year or so and it sure was fun reminiscing our youth and talking about our journeys in life. We all knew what he was facing and his attitude and faith I'll never forget. Again, I could talk all night about my memories of him but I'll just close with, I loved you Ken Palmer and I'll remember you always.
Comment Share
Share via: 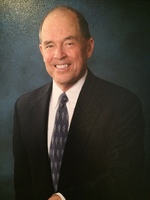