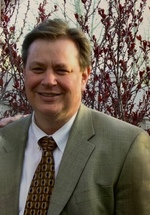 “It is not always to the swift, but to those who keep on running.” Kevin Palmer Thomas, age 59, passed away unexpectedly in his sleep on Monday, November 11, 2019 in his home in Murray, Utah.

Kevin was born in Provo, Utah on July 24, 1960 to Delano and Faye Thomas. He is survived by his older brother John, his youngest brother, Steven, his four daughters: Aubree (Michael), Amber (Trace), Megan (Blake), and Camille, and by twelve beloved grandchildren. He is preceded in death by his mother and father, and his younger brother, Greg.

Kevin was married to Heather Hirsche in 1982 in South Jordan, Utah. They built a life together in various places, finally settling in Lindon, Utah. They later divorced in 2009.

Kevin graduated from Provo High School in 1978. He firmly believed in the value of hard work and he worked hard for all of his life, running and working for various businesses, which carved a pathway for him to create the company, Mortgage Investors with his brother, Greg. The two worked side-by-side, very successfully in their business for more than a decade.

Kevin loved God and shared his testimony of Him everywhere he went. He served a mission for the Church of Jesus Christ of Latter-Day Saints in the Dakotas from 1979-1981. He also served as a bishop in that church from 2002-2005.

Kevin’s passion was sales, and providing for his family. He loved the ski slopes, and on any given night he could be found yelling from the couch at a sports game with a Diet Coke in his hand, or out to dinner with one of his many friends. Kevin was a people person, and his contagious charisma could make anyone from his best friends, to strangers in grocery store check-out lines smile and laugh.

Kevin’s true love was his daughters. He worked hard for most of his life to provide for them, and rarely let a day go past without making at least one of them feel special. His many jokes, stories, and sayings will bring belly laughs for years to come.

Funeral services will be held on Saturday, November 23, 2019 at 11 am at Nelson Family Mortuary, 4780 North University Ave. Provo, Utah. There will be a visitation from 9:30 to 10:30 a.m. prior to the services at the mortuary. Interment will be in Eastlawn Memorial Hills, Provo, UT.