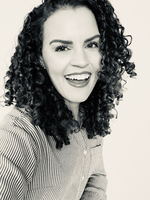 TO WATCH WEBCASTING CLICK ON "PHOTOS & VIDEOS" TAB ABOVE, IF ON A CELL PHONE SCROLL TO BOTTOM OF PAGE

Kirsten was born on March 14, 1985, in La Mirada, CA. She was a happy and precocious child, full of life, and a joy to be around. She was active in church, achieving her Young Women in Excellence Award. Kirsten graduated from early morning Seminary and High School (Canyon Springs HS, Moreno Valley, CA) in 2003. She then moved to Provo, UT to attend school. She later became a Dental Assistant, and while she was working at an office in Provo, Utah, she met her future husband, Nathanael. In May 2007, she and Nathanael were married and sealed in the Redlands, CA, Temple for time and all eternity.

In 2010, Kirsten and Nathanael moved to Surprise, AZ, for Dental School. Their daughter, Chloe, was born in March 2012. Nathanael graduated from Dental School in 2014 and the family moved to Payson, UT. The family then welcomed a fine young boy, Gavin, in April 2015. The family relocated to Pueblo, CO, and Tucson, AZ, for Nathanael to practice as a Pediatric Dentist.

In the spring of 2017, Kirsten was diagnosed with Stage 3 Breast Cancer. She was strong and courageous for two years. By 2019, she was in remission and moving on with her life. In June of 2020, cancer came back with a vengeance. She will always be remembered for the joy and happiness that was felt when she was around. We will greatly miss our beloved wife, mother, daughter, and sister.