To share your memory on the wall of Louise Harrison, sign in using one of the following options:

Print
Louise Partner Harrison was born June 28, 1952 to Thora May Hughes Partner and Harry Elbert Partner in Panguitch, Utah. She passed away, on her sister Marilyn's birthday, October 27, 2019.
When her mother realized she was in labor , Lula Moore,... Read More
Louise Partner Harrison was born June 28, 1952 to Thora May Hughes Partner and Harry Elbert Partner in Panguitch, Utah. She passed away, on her sister Marilyn's birthday, October 27, 2019.
When her mother realized she was in labor , Lula Moore, a neighbor picked her up and they headed to Panguitch 36 miles away. 15 miles of dirt and gravel road. Two miles from Henrieville they came to Paria Creek which was flooded from a rain storm earlier in the day. They returned to Henrieville to get a neighbor Helen Willis Zabriske to take them in a 4 wheel drive Jeep. They picked up her dad at the junction to Bryce Canyon National Park where he worked. She was born within minutes of arriving in Panguitch.
Her parents put the name Louise Partner on the birth certificate. When she was blessed by her grandfather Hughes he named her Thora Louise Partner. She didn't find the difference until she applied for a passport.
She was called “little Blue eyes” by her grandpa, “weezey” by her sisters and “ma-weis” by her grandchildren.
She felt lucky to live in Henrieville and knew it as the most beautiful place on earth.
It was not until she was nine that they had indoor plumbing. She was so excited that she stayed home from school to watch the construction.
Saturday evening baths were a wonderful memory. They listened to Polka Party music while her mother baked homemade rolls and bread. Her dad put curlers in her hair that she slept on all night so she would have curly hair for sunday church meetings. When the rolls came out of the oven they enjoyed rolls and butter. It was a happy time in the Partner house.
Her dad loved to watch boxing matches. When a previously fought professional boxing match finally came to the theater in Tropic, it was a chance for the family to go to the movies.
She had chores in the house and outside. She disliked bringing in wood and coal. She had a big imagination and knew the devil or one of his mean spirits was outside to get her.
The 4th and 24th of July were her favorite holidays. Her mom always got her girls a new outfit to wear.
When she was ten, because of doctor bills, the children did not get anything for Christmas. When she went back to school she couldn't bring herself to say she didn't get anything for Christmas when the teacher asked the students. She said “I got the Lennon Sisters dolls”. Her teacher said “I'm not aware of such a thing”. Louise told her teacher “well there is”.
Her or her sisters never had a bike. Her sister Joyce borrowed one so she could ride with friends. Louise rode on the handle bars and they wrecked. She cried like she was dying. Joyce told Louise to stop crying because if mom finds out she will kill me.
She graduated from Bryce Valley High School in 1970. She attended Weber State College in Ogden, Utah because her sister Evelyn attended their. After being in school for a short while she did not feel it was right for her. She came home and went to live with her sister Joyce in Long Beach, California.
She worked at the “Pinks” a motel and restaurant by Bryce Canyon National Park. She sold Avon on the Grandview hill. She worked at the Provo School District in food services and at Westridge School as a reading tutor.
First and foremost she was a mother who instilled in her children a desire a excel and do hard things. She was a loving and kind grandmother to each and every one of her grandchildren.
She served in many church callings and always did her best.
She met Joel Harrison in Long Beach, California and they were married in the St. George Temple on June 26, 1971. They lived in Long Beach, California until October 1977 and then moved to Provo, Utah.
Married life was good with many trips to visit grandparents in Henrieville, Utah and Afton, Wyoming when the children were younger. Summers were spent at the baseball and softball fields watching children participate in sporting activities. Fun times were spent watching the older grandchildren participate in cross country and mountain biking meets.
When the children were married vacations and cruises were taken. Many trips were taken on the motorcycle to Yellowstone, Bryce Canyon and Grand Canyon National Parks and places in between.
She is survived by her husband Joel Harrison, children Lisa Smith (Darren); Ryan Harrison (Emily); Clayton Harrison (Lauren); 10 grand Children with another expected in November. She is also survived by sisters Carol Holmes (Bill); Evelyn Parry (Grayson); Marilyn Bilbo (Chuck); brother-in-law, Lee Sorensen.
She was preceded in death by her parents, a son, Steven, and a sister, Joyce Sorensen.
Read Less

Consider providing a gift of comfort for the family of Louise Harrison by sending flowers.

We encourage you to share your most beloved memories of Louise here, so that the family and other loved ones can always see it. You can upload cherished photographs, or share your favorite stories, and can even comment on those shared by others.

Posted Oct 31, 2019 at 12:23am
I will miss my Aunt Louise. I know she missed my mom, her sister Joyce, and her wonderful son Steven so I know in my heart she is happy and surrounded by family, but I am still so sad for myself. I will miss her laugh and her wonderful smile. She was always so good to me through out my life. She always made me feel loved.
Comment Share
Share via:
CH

Posted Oct 30, 2019 at 11:32am
My dear sister, Louise, was the fourth sister in a tight-knit unit of the five Partner girls. She was the sparkling star that inspired us to giggle, enjoy life and love one another. In her childhood years, she learned to work hard by cleanimg house, weeding and irrigating huge vegetable gardens and in bottling fruit, vegetables and jams. For fun, she joined her sisters in hiking the hills surrounding Henrieville, making homemade candy, wading in the ditch and playing restaurant with her sister,
Evelyn. Throughout my adult life, my Louise has been my rock and listening ear. She was honest to the cote and dedicated to her husband, children, grandchildren and to her sisters. Throughout the past few years of suffering her words always were: "It's going to be OK." And through the past few days, I have felt comforted to know it is OK!!!.

I always enjoyed hearing Louise talk about her sisters. Her love was deep.

I will miss you. Louise. I will miss our visits when I'm in Utah. I will pass your house and think of your cheerful face. I will remember the happy talks you, Gail and I had on our visiting tracking visits. My deep sympathy to Joel, Lisa, Ryan a d Clayton. I loved being your neighbor for so many years. Your genuine friendship was a great gift. I do feel joy knowing she is loving on Steve. Glenda 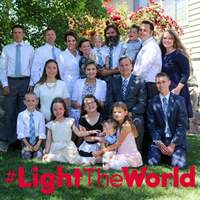 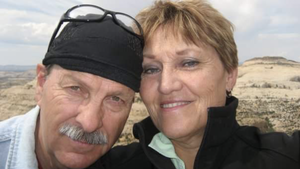 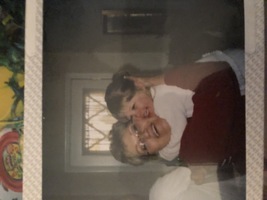