To share your memory on the wall of Margie Bergman, sign in using one of the following options:

Martje DeVries Bergman, of Salt Lake City, passed away on August 7, 2020, at the age of 91. Martje (known as Mart or Mar... Read More
TO WATCH GRAVESIDE SERVICES CLICK HERE:

Martje DeVries Bergman, of Salt Lake City, passed away on August 7, 2020, at the age of 91. Martje (known as Mart or Margie) was born on February 16, 1929 in Dordrecht Holland to Auke an Neeltje DeVries. She left Holland on December 6, 1949 to immigrate to the United States, arriving in New York Harbor on December 14, 1949. On December 18, 1949, they arrived in Salt Lake City, Utah to start their new life. Mart married Richard Owen Bergman on December 4, 1952. They were blessed with 2 daughters; Yvonne McDonald (Wayne) and LuAnn (Sharon) Bergman.

At the age of 11, on May 10, 1940, she watched as German soldiers parachuted in to take over her beloved city, some even landing on their roof. Over the next 5 years she endured many hardships; including starvation and having to share their home with soldiers. She came through the war strong and determined. After arriving in the United States with only 2 dresses and a pair of shoes, she made a beautiful life. She never returned to Holland, as the memories of the war were too difficult.

Mart loved to shop “downtown” at the ZCMI center with her sisters each Saturday. They could be heard throughout the shopping center speaking their native tongue. She also loved the slot machines in Wendover and Bingo. Most of all she loved her family. It was a special treat when she took her granddaughters “downtown” to shop, as she spoiled them – including eating in The Tiffin Room! Tracy and Mindy fondly remember the Christmas that she sacrificed her bonus and had her employer help her find Cabbage Patch Kid dolls for them. They were sold out everywhere but she found them, paying over $100 each. It was the best Christmas ever! Once the great grandchildren started to arrive, her heart grew even more. She even attended many of their births and adoption proceedings. “Oma” as she was known to her granddaughters and great grandchildren always left lipstick marks on their cheeks, always had a dollar or two to slip in their pocket, and was always stocked with chocolate and candy. She never missed family functions, blessings, baptisms, and even school programs. Family was everything to her and her fierce love was always felt.

Mart is survived by her 2 daughters Yvonne and LuAnn, 2 granddaughters; Tracy Ladle (Trent), and Mindy Anderson (Kyle), and 10 great grandchildren.

Preceded in death by her parents, her sweetheart, Richard, and her siblings; Auke, Annie, Jacoba, Gretha, Adriana.
Read Less

Receive notifications about information and event scheduling for Margie

Consider providing a gift of comfort for the family of Margie Bergman by sending flowers.

We encourage you to share your most beloved memories of Margie here, so that the family and other loved ones can always see it. You can upload cherished photographs, or share your favorite stories, and can even comment on those shared by others. 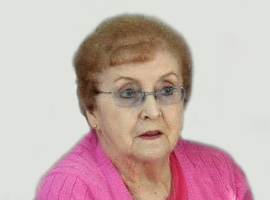