To share your memory on the wall of Cristina Contreras, sign in using one of the following options:

Provide comfort for the family of Cristina Contreras with a meaningful gesture of sympathy.

Cristina (as she was known) was born in 1924 and was a devoted Christian, sister, mother and grandmother. Cristina was an extremely intelligent woman. During her life she owned her own r... Read More
Maria Cristina Roman Contreras
1924 - 2019

Cristina (as she was known) was born in 1924 and was a devoted Christian, sister, mother and grandmother. Cristina was an extremely intelligent woman. During her life she owned her own restaurant, became a nanny, and managed to raise two sons as a single mother. Cristina was a professional nanny for the Honorable Bruce Babbitt (Governor of Arizona) and his lovely wife. She helped raise their two boys, taught them Spanish, and taught them about the Mexican culture. During her time with Governor Babbitt she met President Jimmy Carter, Senator Robert Dole, Senator Ted Kennedy, among many more. They all knew her by name. She retired in 1994 and moved to Utah in 2008.

The standards she set for her sons where based on Christian (Catholic) beliefs and she expected her sons to attain as much education as they needed and be the best they could be. Her joy were her grandkids; John (JC), Jaime, Jenafer, Julia, Zachy, and Jordan – and her great grandkids; Lena, Tia, Bobby, Jesse, Amber, Violet, and Samuel. She served her church faithfully until she could not attend. She will be missed terribly, but she is also in a better place with her first love…our Lord Jesus Christ. I will miss you tons Mom (your son John).
Read Less

Consider providing a gift of comfort for the family of Cristina Contreras by sending flowers.

We encourage you to share your most beloved memories of Cristina Contreras here, so that the family and other loved ones can always see it. You can upload cherished photographs, or share your favorite stories, and can even comment on those shared by others. 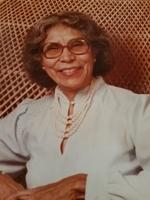