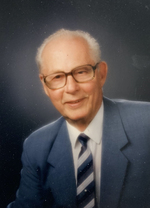 TO WATCH THE WEBCAST OF FUNERAL SERVICES, PLEASE CLICK ON THE PHOTOS AND VIDEOS TAB. IF YOU ARE ON A CELL PHONE, SCROLL DOWN.

Marlon Jansson Rowan (103) of Provo Utah passed away peacefully on September 22, 2020 surrounded by his family at the home of his daughter. Marlon was born on July 8, 1917 in Murray, Utah to Milo Legrand and Anna Ardella Rowan. At age of 1, the family moved to Ririe, Idaho where Marlon became a long-time resident, living in Ririe for most of the next the next 65 years.

In 1933 he was in the first graduating class of the newly established Ririe High School. Marlon continued his education at Idaho State University, later transferring to the University of Idaho in Moscow, where he studied Architecture. After college he moved back to Ririe where he started farming. He was a well-known business man in Ririe where he and brother-in-law Fay Anthony operated and ran the Ririe Sales Agency and the Amoco Oil Distributorship in Ririe, Idaho Falls and surrounding area.

Marlon was best known for his piano playing ability. He studied as a classical pianist but at a young age he started playing in dance bands, and soon developed his own unique style of soft jazz. In addition to his enhanced training he had a unique ability to read music in one key and play in another, often playing by ear. He performed in dance bands for all of his adult life, giving his last solo performance on September 14, 2020 in Provo at the age of 103.

Marlon built a large family cabin in Palisades, Idaho and he also spent time building boats and other wood working projects with his children and grandchildren. He was an avid boater and entertained many family and friends on boat trips through the San Juan and Canadian Gulf islands. His other hobbies included snow and water skiing which he loved doing with family members.

On October 29, 1937 Marlon married Emma Lindsay in the Logan LDS Temple. To that marriage were born 5 children, Linda, David, Victor, Marsha and Scott. Emma unexpectedly passed away on December 6, 1956 at the age of 39. Soon after, Marlon met Sharon Johnson of Rigby, Idaho while playing at a dance in Rigby. Marlon and Sharon were married on July 23, 1957 in the Idaho Falls LDS Temple and soon welcomed Kris and Shelly into the growing family. They celebrated their 63rd anniversary earlier this year.

In 2007 Marlon and Sharon moved to Great Falls, Montana where they lived until their move to Provo, Utah in December 2019. For 35-years they spent their winters in Palm Springs, California.

Marlon was a faithful member of the Church of Jesus Christ of Latter-Day Saints serving in many callings including serving in a Bishopric and as Stake Executive Secretary. In 1995 Marlon and Sharon were called to the Temple Square mission where they served for 18-months. A true highlight for Marlon was regularly playing the grand piano in the lobby of the Joseph Smith Building. Marlon then served for seven years, until age 89, as an ordinance worker in the Seattle Washington LDS Temple. His favorite calling, however. was Primary Pianist.

Services will be held at the Nelson Family Mortuary located in Provo, Utah on Friday September 25th at 11:00 a.m. with a brief viewing prior to the service. A graveside service and interment will be held on Saturday, September 26th at 11:00 a.m. at the Ririe Shelton Cemetery located in Ririe, Idaho. Immediately following the interment there will be a gathering and luncheon at the Ririe Stake Center, and the family would love all to join. Please gather with us to celebrate Marlon’s well lived life.