To share your memory on the wall of Martha Draayer, sign in using one of the following options:

Print
It is with great sadness that we share the passing of Martha Louise Brown Draayer from her lifelong and valiant battle with diabetes on July 5, 2019.

Martha was born in Los Angeles, California on April 2, 1943, to Harvey Wayne Hill & Mar... Read More
It is with great sadness that we share the passing of Martha Louise Brown Draayer from her lifelong and valiant battle with diabetes on July 5, 2019.

Martha was born in Los Angeles, California on April 2, 1943, to Harvey Wayne Hill & Mary Frances Braly Hill. There she flourished as a young woman starting an exciting modeling career with the likes of Cheryl Tiegs. She was known as “The Dippity-Do” girl and one of the “Pepsi Co.” girls. She also appeared on “Let’s Make A Deal” with Monte Hall where she won the Big Deal! A born entrepreneur, she excelled at many home businesses and bazaars in the Tarzana area of California. Her love of photography brought her to the other side of the camera as a professional print photographer. With her lifelong passion for photography and design, she produced many album covers of note.

Martha was a genuine people person with enigmatic charm. She married and had two beautiful daughters Belinda and Samantha, whom she adored. In 1979 she moved to Park City, where she started her real estate career in 1981. Professionally, she instilled feelings of trust and honesty, and all who had any dealings with her can attest to this. Over the next few decades, she became one of the most successful women in the local real estate market, while raising two wonderful daughters on her own. Martha, instrumental in the growth of this community, will be remembered for contributing to bringing Park City into the world's limelight.

An avid gardener, she loved flowers of all kinds. Travel was a passion. She spent time in Iran, China, Israel, and Hawaii. And she had a love of the ocean and beach and tried to get there as often as possible. She adored her grandkids and looked forward to spending time with them. Martha, a quick wit, and fierce competitor, played Scrabble with whoever would play and always had a cold brew with Mexican food.

Her accomplishments are numerous and cannot be merely written down but simply admired. An inspiration, Martha and showed what hard work and determination was in the face of adversity. She met Chris Draayer in Park City and they married in 1994 in the Salt Lake LDS temple fulfilling a lifelong goal of hers. Martha is survived by her daughters Belinda and Samantha, four grandchildren: Ashley, Hunter, Fischer, Tabitha, and two great-grandchildren Noah and Indra. She will be greatly missed and always remembered.

In lieu of flowers, a donation can be made at Mountain America Credit Union under Martha Brown Draayer, 1-800-748-4302.

Graveside services will be held at the Oakley City Cemetery on Friday, July 19, 2019, at 11:00 am, with lite lunch served at the Oakley/Peoa church after the service. To express condolences visit www.NelsonMortuary.com
Read Less

Receive notifications about information and event scheduling for Martha

Consider providing a gift of comfort for the family of Martha Draayer by sending flowers.

We encourage you to share your most beloved memories of Martha here, so that the family and other loved ones can always see it. You can upload cherished photographs, or share your favorite stories, and can even comment on those shared by others.

Posted Jul 25, 2019 at 01:48am
To Martha's children ~ Your mother's name caught my attention, so I read her obituary to find out if she was married to Chris and sure enough. Was he Chris Gene? Did his family own the Harley-Davidson store about Ninth South and State in Salt Lake? If so, we have a connection because his mother and my daddy are first cousins. I am sending you love and sadness that you are without your precious mother here in mortality....
Comment Share
Share via:
P

Posted Jul 18, 2019 at 03:14pm
Martha was always full of life and ready to work. she was smart and a go-getter! Crazy driver!
we loved her and her family and although she had been sick for a long time, I will remember her full of life!
Comment Share
Share via:
H

I was shocked and saddened to hear about Martha's passing. She never let on that she was ill and I never heard her complain. She was always so pleasant to talk with and such a gentle soul. She will be greatly missed. My sincerest condolences.

I am so sorry to hear about your Mom's passing. My association with your mom began well before Real Estate, Martha was a customer of mine at Nordstrom. She had a keen sense of style, an effervescent personality and was a delight to be around. In the years we knew each other there, I knew she had health challenges, but she never complained and spoke so highly of her darling daughters.. Thinking of you and your family...Heidi
Comment Share
Share via:
AB

Posted Jul 16, 2019 at 05:50pm
Martha was always a pleasure to deal with when we crossed paths. I remember Chris Draayer too, went to church with him for years until his pre-mature passing. Like Martha, he was a kind and generous spirit. Good hearts have an attraction to each other. Chris probably met Martha on some kind of heavenly-Harley as she passed through the pearly gates. I imagine a few rolled eye-balls up there as he gooses the throttle, winks and tells her "the new 'cloud-tail' air-ride is righteous." I also imagine everyone smiling as she swings a leg over and they ride off, glad to be together again.
Comment Share
Share via: 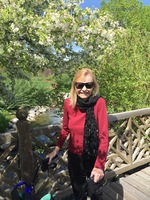