To share your memory on the wall of Marvin Nelson, sign in using one of the following options:

He married Renee C. Nelson on January 26, 1951 in the Salt Lake Temple, while both were ... Read More
Retired BYU Professor, Marvin N. Nelson died peacefully on October 2, 2019. He was born November 10, 1928 in Provo, Utah to Andrew and Ellen Nelson.

He married Renee C. Nelson on January 26, 1951 in the Salt Lake Temple, while both were attending BYU. He joined the Air Force and his Utah National Guard Squadron was stationed in Kansas during the Korean War. He ended his military service with the rank of major.

Marvin enjoyed his retirement years spending time with his family, traveling, and working in his yard. His family includes: Vincent (Karen); Kline (Marina); Nate (Wendie); Gavin (Linda); and Jordan, along with 15 grandchildren, and 12 great-grandchildren. He was preceded in death by his wife Renee, granddaughter Alexis, and three brothers Milton, Ivan, and Lynn.

A graveside service will be held at 11:00 am on Saturday, October 12, 2019 at East Lawn Memorial Hills Cemetery (4800 N 650 E, Provo). Family and friends are invited to attend. To express condolences www.NelsonMortuary.com
Read Less

Consider providing a gift of comfort for the family of Marvin Nelson by sending flowers.

We encourage you to share your most beloved memories of Marvin here, so that the family and other loved ones can always see it. You can upload cherished photographs, or share your favorite stories, and can even comment on those shared by others.

Posted Oct 11, 2019 at 10:01pm
Every time Marvin came to my mind i have a smile on my face, am so glad to had the opportunity to know him, always happy, always nice, always good listener, always joking.
I know He is in a good place with the people He love it but I miss Him.
Good bye Marvin from me and My Family.
Milena Espinoza
Comment Share
Share via:
TS

Posted Oct 08, 2019 at 01:46pm
Marvin was a kind, friendly and talented person. He was polite and cordial to everyone with whom he crossed paths, and he never boasted about his accomplishments. Marvin once said that when he went outside on a summer morning, before the heat of the day set in, he felt like all was right with the world. He loved nature and the mountains, and he will be missed.
With sympathy to his family, Kathy Schenk
Comment Share
Share via:
PW

Posted Oct 08, 2019 at 12:00pm
Karen and I have been friends with Marv for over 20 years and have grown to love him and his great friendship. We went to dinner every month and shared food at Cracker Barrel and Brick Oven on most of those months. We always finished up having ice cream at Rockwells with Marv's favorite Brown Butter Pecan. He loved living in his home and taking care of his yard that had regular visits from deer in the area. He was fond of them. We will miss him but know his age was catching up to him as he lost much of his strength. We extend our blessings to all of his family at this tender time.
Paul Warner
Comment Share
Share via: 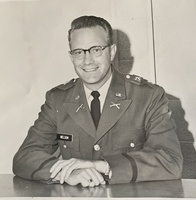