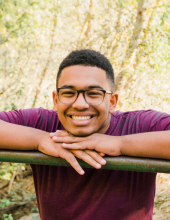 In Memory of
Mateen Desmond
Lomax
2000 - 2019
Click above to light a memorial candle.

Mateen Lomax passed away on November 20th, 2019. Mateen Desmond Lomax was born on March 2, 2000. His Dad and Mom were overjoyed to have their first boy. Mateen was and still is a mama’s boy. His first words were “Mom”, “food” and “more”, and he would mix them up according to his needs. He was a brilliant scholar with an old soul. Mateen loved to have meaningful conversations with anyone who had a listening ear, and would talk away with his insightful “inciteful” intellect, confident in his knowledge. He graduated from Spanish Fork High School with High Honors and a Presidential Scholarship to Southern Utah University. From the day he could talk, Mateen was big on following the rules and having things be fair. His aspiring dream of one day becoming a judge fit every fiber of his character. He was an amazing athlete, and his dad couldn’t wait coach his oldest son, so his football career started in Kindergarten. “Mateen the Machine” was a running-back at Spanish Fork High School, and electrified the crowd as he bobbed and weaved through defenders with ease. He was a joy to watch on the football field. After and during high school, he would help his father coach other football teams. His intellect and physical abilities made him a natural teacher on the field. Mateen loved musicals and performed in many of them. His favorite musical was Hamilton and he had the chance to go see it in Chicago with his mama. He said it was one of his favorite memories. He had a special connection with our year old puppy Minte, and loved playing tug a war and dragging her across the carpet. He loved spending time with his siblings. Myra, Tremaine, and Taytum were some of his best friends and the time they spent together was precious.