To share your memory on the wall of McCoy Christensen, sign in using one of the following options:

McCoy was born on December 28, 1924 in Mapleton, Utah to Myrtle Romero Christensen and William Christensen. McCoy was the youngest of six brothers—two sisters were born several years later. McCoy turned 18 shortly after the United States entered WWII and quickly enlisted in the Navy, serving as a Boatswain's Mate Second Class about the U.S.S. General T. H. Bliss as it circled the world twice, carrying troops and supplies.

On September 4, 1951, he married Delina Matz Christensen in Minden, Nevada as they drove together from California to Utah. They later decided to raise their children in the Church of Jesus Christ of Latter-day Saints and were sealed in the Salt Lake Temple on March 15, 1956. McCoy worked at Geneva Steel. He and Delina settled in Orem, Utah, in a house he built. In the 1960s, he fulfilled an old dream by attending college courses at BYU through the GI Bill, which helped him move into senior management at Geneva.

He retired in 1983: late in life, he celebrated having “beat the system” by being retired longer than he had worked. In retirement, McCoy kept an active, steady routine. He woke up early enough each day to be at McDonald’s by the time it opened at 5 am to pick up his traditional morning Diet Coke. He frequented the Orem Rec Center, where he made lasting friendships. From 1987-88, McCoy and Delina served a mission together in the Mexico City, Mexico Mission. Into his early 90s, he kept an active Hobble Creek golf course membership and tended a garden. He mowed his own lawn until the week of his death. He worked actively on family history projects and enjoyed studying the history of his country and his church.

McCoy is survived by his wife, Delina, and their children: Sandra Wilkes (George), Tamie Nelson (Ed), and Jeff Christensen (Markelle), 14 grandchildren, and 22 great-grandchildren. He was deeply loved and respected by his family members: two grandsons and two great-grandsons carried his name as a first or middle name. He was preceded in death by his parents, his siblings Gerald, Delbert, Othello, Bard, Reed, Lu Dean, and Judy, and a great-grandson, Braeden.

Receive notifications about information and event scheduling for McCoy

Consider providing a gift of comfort for the family of McCoy Christensen by sending flowers.

We encourage you to share your most beloved memories of McCoy here, so that the family and other loved ones can always see it. You can upload cherished photographs, or share your favorite stories, and can even comment on those shared by others.

Posted Apr 20, 2019 at 11:58am
I am so sorry for your loss I knew McCoy from the Orem Rec. Center he truly was the epitome of grace and kindness. I always looked for him when I was there. John Simpson.
Comment Share
Share via:
JB

Posted Apr 19, 2019 at 12:54pm
I met McCoy at the Orem Rec center, I asked about his tattoo's knowing he was probably Navy...had no idea he was old enough to serve in WWII. McCoy is a special person and I enjoyed his company, and stories, very much. I will miss him greatly as he always brought a good attitude and is an inspiration. It was great to know him even though it was brief.
Comment Share
Share via:
J

Posted Apr 18, 2019 at 01:52pm
I knew McCoy when we were young. He was always kind and sweet. Reading his life summary has been a delight. Knowing the two of you were married in the Temple, served a mission in Mexico, his heirs were named after him and that he mowed the grass the week before he died was impressive. I'm glad to see that he retained his wonderful smile to the end. Sincere sympathy to you and your entire family.
Comment Share
Share via:
BT

Posted Apr 17, 2019 at 06:15pm
I am one of the many friends McCoy made at the Orem Rec Center where we often swam together, sat in the hot tub and in the sauna together and had great conversations. I consider McCoy one of the finest men I ever knew. He was a kind and loving man and it has been great fun to be his friend for the last few years. Bill Turner
Comment Share
Share via: 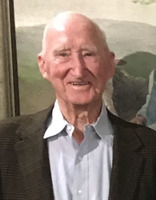