To share your memory on the wall of Merrill Lee, sign in using one of the following options:

Print
Merrill Vallant Lee was born on February 13th, 1923 in Cudahy, California. Of course, to all who knew him (starting with his mother over an alleged bee incident at a very early age) he was “Buzz.” His childhood and teenage years would unfold in... Read More
Merrill Vallant Lee was born on February 13th, 1923 in Cudahy, California. Of course, to all who knew him (starting with his mother over an alleged bee incident at a very early age) he was “Buzz.” His childhood and teenage years would unfold in a story rivaled only by the adventures of Tom Sawyer and Huck Finn. As his family moved wherever work could be found between California, Arizona and New Mexico, Buzz was involved in adventure after adventure, generating stories that would be retold countless times through the decades. Many stories came from his years as a child in “Cactus Flat” or the area around present-day Lebanon, Arizona. As a boy not yet eight years old, he was up before dawn milking cows, turning the water, tending animals, and keeping his shoeless feet warm in fresh cow pies. As the oldest boy and second oldest of the children, he watched over his younger siblings, rode a horse he affectionately referred to as “that little mare” and found friendship with his dog Cub. He was fascinated by the beautiful dark sky filled with stars and loved the smell of the mesquite trees on warm summer nights. He would tearfully recount the dark Cactus night when at eight years old his dad sent him in their old Model A Ford to fetch a doctor for his 2-year-old sister who would succumb that night to Typhoid Fever. As a high schooler at South Gate High in South Gate, California his focus admittedly was football. He would forever love the game. He was nothing if not scrappy. Because of an off-field altercation where he broke his nose, he was the only player on his team with a face mask. At 135 pounds, he started at guard on the offensive line and would cut down defenders twice his size in a heavy run offense. Throughout his life he loved the game and became the ultimate armchair quarterback, sure that he could out-coach anyone. As a gymnast he was captain of his high school team. With the bombing of Pearl Harbor in December 1941, Buzz, like, many of the Greatest Generation, enlisted in military service. He joined the Coast Guard, with promises from the recruiter of sailing the world on fancy “yachts” and enjoying beautiful beaches. Buzz loved the beach. He ended his tour at a long-range navigation station on an atoll (“the rock”) just a mile off the coast of Iwo Jima. There, he witnessed the flyover of the Enola Gay on that fateful mission to Japan that he tearfully would declare “did not need to happen.” During his military service, he made the most important and impactful decision of his life when he married his sweetheart, Palma Rae Bahl, with whom he would spend the next 75 ½ years. With her quiet and confident demeanor and fiscal frugality, she became the real rock that would anchor his life and keep him headed in the right direction. They eventually settled in Downey, California and raised three children. As a youth, Buzz had learned to “set” or install ceramic tile. Upon his military discharge, he perfected his trade and became a master craftsman. With tenaciousness, fearlessness, perseverance and hard work, and in the face of many obstacles, including a fire that completely destroyed his tile factory and conflicts with a hostile union, he built and rebuilt his business into a successful enterprise that would provide very well for his family through his working years and throughout the rest of his life. He developed a reputation for quality, generosity and honesty. Buzz loved to engage with his customers and with people in general. He worked hard every day, except Wednesday, which was his golf day. Ah yes, Buzz became enamored with golf way before golf was fashionable. There was surely no other activity that he enjoyed more. Clubs, balls, hats, sweaters—his cars, his garage and his office were filled with them. He worked obsessively on the game, always tweaking and perfecting. He was a faithful member of the Church of Jesus Christ of Latter Day Saints, the first to affirm to his belief and the first to humbly acknowledge his own shortcomings. His generosity and tremendous empathy for those who were less fortunate was always present. He was ever mindful that he came from nothing economically and never hesitated to help those who were “down on their luck.” Cayenne pepper, apple cider vinegar, prune juice, Shaklee vitamins, not worrying or taking life too seriously, a sarcastic sense of humor, the stalwart support from his loving and very patient wife, the 5:00am workout sessions at the gym well into his 70s, an outspoken passion for conservative politics and the tremendous joy he felt for his children, grandchildren and great grandchildren fueled his longevity. Buzz passed away at home in Orem on January 14th, 2020 after a long and good life. He is preceded in death by almost everyone who was his peer and also by his grandson Conner, who he looked forward to seeing.
Read Less

Receive notifications about information and event scheduling for Merrill

Consider providing a gift of comfort for the family of Merrill Lee by sending flowers.

We encourage you to share your most beloved memories of Merrill here, so that the family and other loved ones can always see it. You can upload cherished photographs, or share your favorite stories, and can even comment on those shared by others.

Flowers were purchased for the family of Merrill Lee. Send Flowers 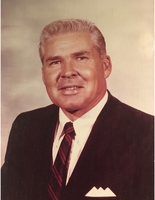