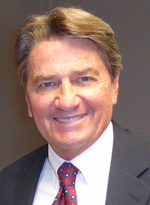 Our beloved husband, father, grandfather, great grandfather, son, brother and friend passed peacefully on Wednesday, May 15, 2019 surrounded by his family and friends after a long battle with Cancer.

Mike loved life and If asked how he was feeling, he’d always say “just peachy.” No matter how good, or how bad – the answer would always be the same. “Just Peachy.” Mike never complained, or had a bad word to say about anyone.

Mike spent most of his life in Provo and was very active in his faith and community. He held many positions in church, including bishop and on the high council. He served a mission in the Netherlands. In the wider community, he was the mayor of Provo in 1993 and was most recently named president the -elect at the Riverside Country Club.

A natural leader, Mike loved people. As an entrepreneur and businessman, he led numerous companies from inception to success and eventual sale. He was remarkable in his commitment to his colleagues and always led with a desire to do what was right by them.

Mike loved sports and was an avid golfer, playing almost every day, and making lifelong friends from those he met along the course. He played football at Provo High, where he graduated in 1969.

Mike was a keen traveler and among his most cherished trips were those with his kids and grandkids. He was a gifted photographer, who honed his talent while traveling the world with his much-loved wife Nancy. Mike’s Asian photographs were among his most inspiring.

Mike was born on September 24, 1951 in Murray, Utah to noted educators. His father, Richard (“Dick”) Hill taught and coached football at Provo High School for over 30 years. His mother, Donna Beth Steadman, was a teacher at Wasatch Elementary until her retirement in 1987.

Mike attended Brigham Young University and graduated with a Bachelors degree and MBA in accounting and business management. His first job was in Boise Idaho where he worked as an accountant. Mike eventually returned to Utah with his young family and continued working as an accountant before becoming a successful Entrepreneur.

To Mike, family was everything. He cherished his wife, children and grandchildren. From holiday shopping with his daughters, to close family time at Snowbird, to Disneyland Half Marathons, to golfing with his sons, he built loving memories and traditions. Loved by all, Mike was known as Papa to his grandkids.

Papa was much loved and his thoughtful, sensitive presence will be greatly missed.

Funeral services will be held on Wednesday, May 22, 2019 at the Church of Jesus Christ of Latter-Day Saints, 450 West 1800 South, Orem at 11:00 am. A viewing will be held at Nelson Family Mortuary, 4780 N University Ave, Provo, Tuesday, May 21, from 6-8 pm or at the church from 9:30am to 10:45 am prior to the services. Interment will be at East Lawn Memorial Hills Cemetery. Condolences may be expressed at NelsonMortuary.com

In lieu of flower please give to the cancer charity, Five for the Fight. https://www.5forthefight.org/