To share your memory on the wall of Mildred Kochenower, sign in using one of the following options:

Mildred Doreen McMillan was the second of eight children born to John and Mildred Huffman McMillan. She was born in the upper peninsula at Trout Lake, Chippewa Co., Michigan on July 13, 19... Read More
Mildred “Doreen” Kochenower (1936 – 2019)

Mildred Doreen McMillan was the second of eight children born to John and Mildred Huffman McMillan. She was born in the upper peninsula at Trout Lake, Chippewa Co., Michigan on July 13, 1936.

After her family moved to lower Michigan, she graduated from Belding High School, and then worked as a secretary for Belding’s Ford dealership before joining the U. S. Navy in May 1956.

After attending the U. S. Navy’s Yeoman-A school in Bainbridge, MD, the FBI did a background investigation allowing Doreen to be granted a top-secret clearance while serving in the Pentagon’s Office of Naval Intelligence (ONI).

Both she and her husband-to-be lived at Quarters “K” Arlington Barracks where she walked the short distance to and from the Pentagon. She and Bob met at the Club Jason where they dated. They married two weeks later as an answer to Bob’s prayer specifically asking Heavenly Father for a worthy woman to bear and raise his children. She has surely been such a mother.

One interesting side-line of Doreen’s Yeoman intelligence specialist duties came while she was an ONI team member and processed reconnaissance photos. Some of these photos were obtained during the U-2 flights of Frances Gary Powers before he was shot down over the Soviet Union. [(re: Tom Hanks 2015 film, Bridge of Spies).]

In 1959, the U. S. Navy was not yet providing maternity uniforms, so when Doreen became pregnant with her first child she could no longer fit in her uniform. She was required to take discharge soon after joining her husband Bob at the London Headquarters of Commander Sixth Fleet. After leaving active duty, she continued the same intelligence work as a civilian even after the birth of her first born. Doreen continued to periodically work as a secretary for the military and in the private sector.

Doreen’s first two children were born in England’s Middlesex Borough at the South Ruislip Royal Air Force Base hospital. Brenda Colleen was born in 1959 and Max Douglas in 1960, who came a bit early but appeared beautiful and whole, then left mortality within seventy-two hours.

After a family move to Florida, James (Jim) Justin was born in 1963. Bob received an assignment as the Assistant Officer-in-Charge for the Naval Security Group at Cape Chiniak, Alaska. There followed a family move to Michigan where Kimberly Dawn was born in 1965, four days before her dad left for Alaska. Doreen roughed it through that winter with a car that was not designed to run well in Michigan’s harsh weather. After thirteen months, Doreen welcomed her husband back carrying in his hand orders for a twenty-seven-month assignment in Winter Harbor, Maine.

Until this time, Bob was fortunate to receive only shore-duty assignments in places offering accommodations for dependents. Knowing that would soon change, she and her husband prayerfully decided to leave the military and use their G.I. Bill benefits to attend college and keep the family intact. Bob wrote to Brigham Young University’s (BYU) President, Ernest L. Wilkinson, who made concessions and replied with approval for 1969 admission to BYU. Both Bob and Doreen attended and graduated from BYU while both working part or full time and raising their family. Doreen graduated with a bachelor’s degree in Family Science and Child Development. During this time in Provo, Utah, she gave birth to Amy Olynn in 1972 and Corin Curry in 1974.

After graduating from college, Bob resumed his military career, taking the family to Washington, California, Okinawa, and Hawaii. Bob and Doreen moved to Provo, Utah after their military service where they have enjoyed their view of and working in the Provo temple and enjoying activities at BYU and the community. Doreen’s temple service included being an ordinance worker from Jan 1997 to Apr 1999.

Despite the fact that Bob was periodically absent for lengthy times during his thirty-plus years in the U. S. Navy, Doreen has been a diligent “keeper of the home fires” while teaching, motivating, and directing her children in their public schooling and their activity in The Church of Jesus Christ of Latter-day Saints. Due to her example and her labors, all her children are responsible citizens with families of their own; two sons and a daughter have served missions.

Doreen’s favorite past-time was coddling her grand-babies, cooking and entertaining for missionaries and for her children’s friends, and in later years her children’s families. Her welcoming spirit made her home a gathering spot. Though she gradually became less capable while contending with eighteen years of Parkinson’s disease, she took great joy in watching her grandchildren grow and being part of their activities. Some snippets about her childrens’ lives are…

−Brenda was a single mom of two for about twenty years. She is now married to Daris “Andy” Nevil and living in Springtown, Texas. She works for Alliant Insurance Services as Assistant Vice President and Project Manager for Information Technology, flying to many locations coast-to-coast.

−James “Jim” is a career pilot for American Airlines. He and wife Rona are living in Flower Mound, Texas and are parents to three athletically active teens.

−Kimberly is an Aquatics Program Manager for the U.S. Marines at Camp Butler, Okinawa, and the single mom to Yoshiki, who was a pro-basketball player, and to Miki, who has twice won bronze medals in the Asian Olympics.

−Amy is a career homemaker and married to Daniel Todd. They are living in North East, Maryland and are parents to four technologically driven boys.

−Corin was a computer programmer and now is a Software Engineer. He and his wife April are the parents of six children and are living in Cedar Hills, Utah.

Doreen is preceded in death by her parents John and Mildred, her son Max Douglas, and her siblings “Jack” (Merlyn John), “DJ” (Dugal Joseph), Louis, Deora, and Sally.

She is survived by her siblings Bill and Cathy, her husband Bobby, her children Brenda, James, Kimberly, Amy and Corin, and her seventeen grandchildren and one great-grandchild.

A viewing will be held on Tuesday, November 26th from 6pm to 8pm at Nelson Family Mortuary, 4780 N University Ave, Provo, Utah.

The funeral service for Mildred Doreen Kochenower will be held at The Church of Jesus Christ of Latter-day Saints chapel, 2400 N 1060 E, Provo, UT on Wednesday, November 27th at 11:00am. A viewing will be held preceding the funeral service from 10:00am to 10:45am.The 1:30 PM Interment will be at Utah Veterans Cemetery and Memorial Park, 17111 S. Camp Williams Rd, Bluffdale, UT.
Read Less

Receive notifications about information and event scheduling for Mildred

Consider providing a gift of comfort for the family of Mildred Kochenower by sending flowers.

We encourage you to share your most beloved memories of Mildred here, so that the family and other loved ones can always see it. You can upload cherished photographs, or share your favorite stories, and can even comment on those shared by others.

Posted Nov 28, 2019 at 10:23pm
I will miss my dear friend even tho years between visits. She's a great lady and we traveled with those Navy husband's wherever.
Love to your family
Barb Dopp
Comment Share
Share via: 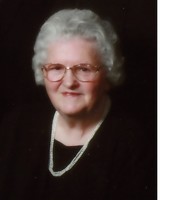 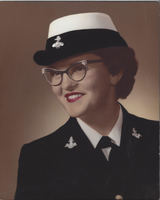