To share your memory on the wall of Jerry Bradford, sign in using one of the following options:

Provide comfort for the family of Jerry Bradford with a meaningful gesture of sympathy.

Our loving father Miles Gerald “Jerry” Bradford passed away at home in Provo on April 22, 2020. Jerry was born in Salt Lake City, Utah on July 27, 1938, to Miles Kenneth and ... Read More
TO WATCH WEBCASTING CLICK ON "PHOTOS AND VIDEOS" TAB ABOVE

Our loving father Miles Gerald “Jerry” Bradford passed away at home in Provo on April 22, 2020. Jerry was born in Salt Lake City, Utah on July 27, 1938, to Miles Kenneth and Mignon Knowlton Bradford.
In 1963 he married JeNeal Jones in the Salt Lake City Temple of The Church of Jesus Christ of Latter-day Saints.

Jerry had a passion for learning. After receiving his bachelor’s degree from the University of Utah, Jerry earned master’s degrees in religious studies from UC Santa Barbara and business administration and finance from San Francisco State University. He earned a doctorate in Religious Study and Thought from UCSB.

He lectured in religion and philosophy at Brigham Young University, UCSB, Bowdoin College, and UC Irvine. Jerry published six books and numerous articles during his career. He particularly admired the life and work of William James.

In 1995 he joined the Foundation for Ancient Research and Mormon Studies (FARMS) as director of research. He later served as associate director of the Neal A. Maxwell Institute for Religious Scholarship at BYU for several years before being named executive director. He retired in 2016 after serving 21 years for the Institute. Jerry endeavored to expand the Institute’s work to “inspire and fortify Latter-day Saints in their testimonies of the restored gospel of Jesus Christ” through various research projects and valued partnerships with other religious institutions and universities.

He was a talented writer and a passionate teacher, and these attributes blessed the lives of his students, neighbors, ward members and family. We are especially grateful that he was able to complete his latest book, The Hope That is In Me.

Jerry served in many callings in the church. For over 40 years he served in his favorite calling as Gospel Doctrine teacher. He also enjoyed serving in branch presidencies at the MTC.

Regardless of his academic accomplishments, he would often say they meant very little when compared to his duties as a father and a husband. He loved his family deeply and encouraged us unendingly. His testimony of the gospel of Jesus Christ and his constant search for greater faith led to his personal, meaningful relationship with his Savior. It was - and is - the greatest blessing to call him Husband, Dad, Grandpa.

His funeral will be live streamed on Tuesday, April 28th at 11:00 am, www.NelsonMortuary.com
Read Less

Receive notifications about information and event scheduling for Jerry Bradford

Consider providing a gift of comfort for the family of Jerry Bradford by sending flowers.

We encourage you to share your most beloved memories of Jerry Bradford here, so that the family and other loved ones can always see it. You can upload cherished photographs, or share your favorite stories, and can even comment on those shared by others.

Posted Apr 30, 2020 at 03:42pm
It was a great day when Jerry arrived at FARMS. We were growing rapidly and didn't have enough staff to keep up. The research arm of the foundation was particularly in chaos, with no clear procedures for granting funds and no one with the time and focus to provide follow up and support to the recipients. Jerry brought order out of chaos and added professionalism to the process--and considerable good humor.

Posted Apr 29, 2020 at 07:03pm
Jerry was a teacher, mentor, and priesthood advisor to me during my undergraduate years at UCSB. One of many bits of wisdom that he shared with me was "don't ever teach something that you might later have to unteach." He was part of a legacy at UCSB of great LDS faculty and staff, from many different disciplines, among whom were Fredrick Williams, James Welch, Dean Mann, Leonard Tourney, Judith Olausen Tourney, Glen Wade, Willliam "Bud" Bridgers, R J Snow, and probably a few others whose names I've forgotten. We all met in a weekly Mormon Studies colloquium - LDS faculty and students - to take a deep dive into all aspects of Latter-Day Saint life, culture, history, doctrine, humor, and much, much more. I have wonderful memories of Jerry during the time he lived in Goleta, California.

Posted Apr 28, 2020 at 05:22pm
Dear JeNeal and family. Such a beautiful service celebrating a remarkable life. Prayers that you may all feel the comforting and healing influence of the Lord at these difficult times. 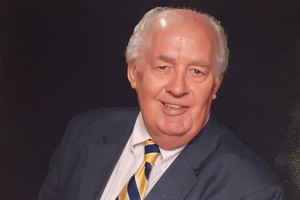