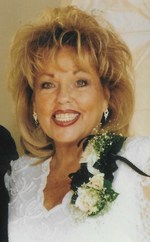 
On August 7, 2020, Dawn Riggs Webb left this mortal life and started celebrating her birthday for eternity as she entered the heavenly realm above. We know she was greeted by her husband, family, friends and many loved ones who had left this earth life before her. They greeted her with open and loving arms.

Dawn was born on Nov. 1, 1933, in St Johns, Arizona, to Don Lynwood Riggs and Verona Whiting. She was a very talented actress, director, dancer, model, and public speaker. She used these talents throughout her life. When she was in high school she was in the student council. She attended Brigham Young University and majored in theatre. She was a cheerleader. She was Miss Phoenix and awarded Arizona Miss Congeniality. She was successful in everything she did.

She met the love of her life, Clifford Webb, in Arizona. The two were married in Tokyo, Japan, while he was serving in the United States Air Force. She and Cliff were in charge of the Johnson Youth Center Japan where they helped the youth with many activities, life skills, and she taught dance. After Cliff was honorably discharged, two years later, they were sealed in the Los Angeles Temple.

Dawn directed many roadshows and had extensive experience in the entertainment field including summer stock, theatre, radio, movies and had a children’s television program. She was president of Utah California Women. She had considerable success in writing and directing award winning LDS dramatic productions. Her greatest triumph was directing the original cast of Saturdays Warrior travel group from 1974-1976. They traveled all over the United States. She met many lifelong friends from directing Saturdays Warrior. She was a wonderful public speaker who could read something one time and have it memorized. She and Cliff traveled throughout the country doing motivational seminars and instructing individuals on ways to improve their lives.

Her two greatest loves were her family and her great love of the gospel of The Church of Jesus Christ of Latter Day Saints and our Savior. She had a Christlike love for everyone. She had a way of making people feel that they had always been best friends. She was always a champion for the underdog. She had many church callings including Relief Society President and Young Women President. She always had a special love for working with the youth. One of the best times in her life was when she was supporting her husband when he was Bishop in Chatsworth, California.