To share your memory on the wall of Robert Heddens, sign in using one of the following options:

Bob was born to Ralph and Laura Heddens, of Cedar Falls, Iowa. He graduated in Ceramic Engineering from Iowa State University and received his MBA from the Krannert School at Purdu... Read More
Robert D. Heddens November 13, 1938 - February 28, 2020

Bob was born to Ralph and Laura Heddens, of Cedar Falls, Iowa. He graduated in Ceramic Engineering from Iowa State University and received his MBA from the Krannert School at Purdue University in 1964. His career was spent with Owens Corning Fiberglas. He retired in 1998 as President of Western Fiberglas, living in Park City, UT. In retirement Bob volunteered with Envision Utah and worked in skier services at Deer Valley resort. He was a dedicated volunteer at the Park City Hospital for a number of years.

His grandchildren were his greatest joy and he loved living in the west for its beauty. He enjoyed fly fishing, skiing, and other outdoor adventures. He and wife Marty traveled extensively after his retirement. He enjoyed planning the trips, accompanied by Dick and Jeannie Griner of Dallas, Texas.

He is survived by his wife, Martha (Keeney) Heddens, son Richard and wife Katherine, grandchildren Kendall Delnort (Bryce), Nicole Heddens, Zachary Heddens, and Elise Heddens. He was preceded in death by his parents, daughter Kathryn Cowburn, and granddaughter Emily Jacobs.

The family suggests memorial contributions be sent to the Parkinson’s Foundation (parkinsons.org) or The Nature Conservancy (nature.org).
Read Less

Consider providing a gift of comfort for the family of Robert Heddens by sending flowers. 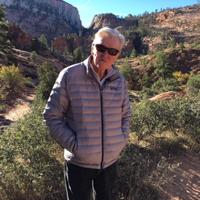