To share your memory on the wall of Thomas Van De Graaff, sign in using one of the following options:

Tommy loved dancing in the kitchen, watching soccer on TV, hearing the sound of a clickin... Read More
Thomas John van de Graaff was born on June 19, 2019 in Provo, Utah. He passed away peacefully in his home in American Fork, Utah on March 14, 2020.

Tommy loved dancing in the kitchen, watching soccer on TV, hearing the sound of a clicking tongue, and looking at colorful lights - whether flashing on a baby toy, outside on display at Christmas time, or even in the arcade section of the bowling alley. Thomas brought his own light to the world, too; it was impossible to miss in his deep blue eyes.

Thomas was born with layers of skin missing from most of his fingers. He went on to develop blisters all over and inside his body, which spread quickly, never healed, and caused him a tremendous amount of pain. When he was four months old Thomas was officially diagnosed with Junctional Epidermolysis Bullosa Generalized Severe. He fought the disease with more strength than an infant should ever have to know. Thomas was and will always be an inspiration to those who knew him.

A funeral service for Thomas will be attended by immediate family later this week.

Those who desire may make donations in memory of Thomas to the EB Research Partnership.
Read Less

Receive notifications about information and event scheduling for Thomas

We encourage you to share your most beloved memories of Thomas here, so that the family and other loved ones can always see it. You can upload cherished photographs, or share your favorite stories, and can even comment on those shared by others.

Posted Apr 02, 2020 at 09:41am
To Thomas’ family and friends,
I am so sorry for this loss. What a tragedy. May Jehovah god comfort you by means of the Bible, something that has given me true comfort. We look forward to the time the Bible promises will soon take place, when “death will be no more..” Revelation 21:4.
May you find comfort in knowing that Jehovah knows the pain you feel, and promises we will have the hope of seeing them resurrected in perfect health. John 5:28,29.

Posted Mar 17, 2020 at 02:50pm
The photograph of this precious gift from Heavenly Father looks like a beautiful porcelain doll. Heavenly Father has called him home for a greater work. Russell and I grieve for your loss but also know for a surety that Thomas John van de Graaf is still yours and that you will be able to hold him in your arms someday without him hurting. We love you, Pat and Russ Carr.
Comment Share
Share via:
OE

Posted Mar 16, 2020 at 05:02pm
On behalf of your EIU family, I send you our deepest condolences. There are no words to offer at the loss of a precious babe. May Thomas rest in peace and the family find comfort in each other until the family can be reunited again. You are in our thoughts.
Comment Share
Share via:
GF

Posted Mar 16, 2020 at 01:20am
I have followed Thomas’ and your journey from the beginning. I love you all. I have been praying for you all and will continue to do so. I wish I could be with you in body, but please know that I am definitely with you in Spirit. He is in Heaven now. 🙏🏻🙏🏻❤️❤️😘😘 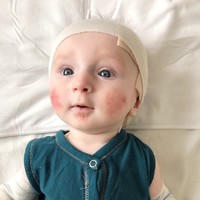