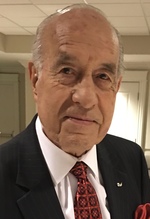 Victor LeRoy Hansen believed, “Life is good…but you gotta be tough.” And while his loved-ones struggle to be tough in his absence, we find peace in the celebration of his good life.

Born August 14, 1928, in Provo, Utah, 5th of 7 children to Oliver & Edna Hansen, he lived through the Great Depression but because of the resourcefulness of his family, never felt deprived. An obedient, respectful child, he developed a love of music from his mother, a painter’s eye from his father, and a love of nature’s beauty from both.

He met Ruby Marie Jones at a BYU football game and won her over with a sack of apples. That night, he told his mother he’d met the girl he was going to marry. They were wed June 17, 1952 in the Salt Lake Utah Temple.

Mere months later he deployed to the Korean War as an Army Staff Sergeant assigned to a battalion office. His service in Korea was cut short by the tragic death of his first child, Vicki Linn, at birth. He returned home to Ruby determined to move forward with faith.

He graduated with a Bachelor’s degree in Music Education from BYU in 1955, and spent his professional career teaching choral music to children of all ages.

He loved to travel (visiting all 50 states, and 30 countries), tending to his flower garden, meeting new people, and serving in his various church callings. But his greatest love and joy was his family.

Due to the current COVID-19 health concerns, funeral services will be for immediate family only.