To share your memory on the wall of Vince Aranda, sign in using one of the following options:

Provide comfort for the family of Vince Aranda with a meaningful gesture of sympathy.

He was born in Moquegua, a city in southern Peru on October 19th, 1936. As the oldest child he worked diligently to help his dear mother with m... Read More
Vincent Patrick Aranda (82) passed away peacefully on Tuesday, June 25th, 2019 in Orem, Utah.

He was born in Moquegua, a city in southern Peru on October 19th, 1936. As the oldest child he worked diligently to help his dear mother with many of the household responsibilities. His mother instilled in him kindness, an impressive work ethic and the meaning of sacrifice.

Vincent worked and lived in Lima, Peru during his young adult years. He then met and fell in love with Terlinda Siancas and they were married in Lima, Peru on September 20th, 1964. He studied at the Federico Villareal National University where he received an accounting degree. Vincent and Terlinda lived in Lima until 1979 when they were presented with an opportunity to travel to the United States to work and start a new life. They continued to work tirelessly to learn the English language and provide every needful thing for their three young daughters. Vincent continued to work in accounting and was always appreciated by his employers because of the meticulous and careful attention he gave to everything he did. He worked for Peaches Records and Tapes (Hollywood, CA), Law Offices of Robert Slater (Beverly Hills, CA) and eventually started his own Tax Preparation business in Sylmar, CA and later in Provo, Utah in 1996. He served countless of members of the Hispanic community in Utah County as a tax preparer, advisor, trusted friend and advocate.

Vincent dedicated his life to learning and working hard to provide for those he loved. Education was very important to him and wanted to instill in his family to always make it a priority. He also enjoyed to laugh and tell jokes to anyone who would listen. He especially loved spending time with friends and family around a table enjoying a great meal. His pride and joy was his family. His grandchildren in particular, were a source of great pride and joy.

Vincent is a member of the Church of Jesus Christ of Latter-Day Saints. He served with vigor and dedication in many capacities including 2nd counselor in the Granada Hills California Spanish Ward.

He is preceded in death by his daughters, Yvonne Williamson (Danny II), Eda Aranda, and sons: Max and Fernando Aranda (twin babies), his parents: Isidoro Aranda and Eulogia Aranda and canine companions, Mitzie, Sabbath and Archie.

Graveside service will take place on Monday, July 1st at 11am at Orem City Cemetery.

We would like to extend our immense gratitude to all the doctors, nurses, surgeons, physical therapists, transportation providers, dialysis, hospital and hospice staff who provided the kindest and most attentive care to our father during the difficult years he battled complications from diabetes. We are eternally grateful for your service and love.
Read Less

Consider providing a gift of comfort for the family of Vince Aranda by sending flowers.

We encourage you to share your most beloved memories of Vince Aranda here, so that the family and other loved ones can always see it. You can upload cherished photographs, or share your favorite stories, and can even comment on those shared by others. 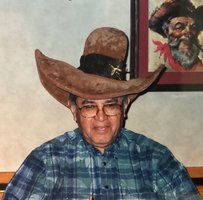