To share your memory on the wall of Vivian Luikart, sign in using one of the following options:

Print
Vivian was born in Joseph City, Arizona to Emil Pooley and Clara Loretta Leman Pooley. She was the 6th of 7 children born to Emil and Clara and was a firecracker from that October day in 1953.

She grew up in Joseph City and Greasewood, ... Read More
Vivian was born in Joseph City, Arizona to Emil Pooley and Clara Loretta Leman Pooley. She was the 6th of 7 children born to Emil and Clara and was a firecracker from that October day in 1953.

She grew up in Joseph City and Greasewood, Arizona. She lived in the dormitories in Holbrook, Arizona during elementary school. After elementary school, Vivian went on the placement program in Provo, Utah, and attended Farrer Junior High and Provo High School. In 1974, she attended Brigham Young University in Provo where she was a part of “Lamanite Generation (Living Legends)” music and dance group.

After being a stay-at-home mom for 16 years, she graduated from Utah College of Massage Therapy in 1994. Vivian moved to Las Vegas Nevada where she met Gene Luikart. The two were married on August 26th, 2000. She later moved to Provo, Utah to be with family and friends.

Vivian worked in the Brigham Young University athletic program as a massage therapist for more than 20 years. She also worked at Lone Star Chiropractic and at various other opportunities to help people recover from injury. In the BYU Athletic program, she knew and loved everyone. The boys she treated became her beloved sons, sons she never had on her own. If there was someone with sore muscles, pain, or physical distress, she was anxious to get them fixed and back on the field or court to compete. On her massage table, Vivian could make a tough, angry, 300lb lineman cry like a baby. As was told to one of Vivian’s daughters recently, “countless professional athletes owe their careers to Vivian Luikart.”

Vivian loved to garden and was always known to have plenty of strawberries, raspberries, tomatoes and green chilis for everyone. To her family and friends, Vivian was nothing short of a hero. At just 5’2” she was larger than life. Many of her relationships with friends and associates are many decades old. Her smile, her personal sacrifice, her love for those nearest her, will be greatly missed.

On Tuesday September 29th, Vivian was admitted to UVRMC with Pneumonia which was complicated by Covid-19. She went into cardiac arrest on Saturday evening, October 3. Doctors and medical staff were unable to revive her and she passed away just after 9pm.

A public viewing will be held Thursday evening at Nelson Family Mortuary located at 4780 N University Ave in Provo, Utah from 6pm-8pm. A private graveside service will be held at 10am Friday morning at the Provo Cemetery. A live webcast will be available starting at 10am here: Graveside Services . A recording of the service will also be available later at that website
Read Less

Receive notifications about information and event scheduling for Vivian

Consider providing a gift of comfort for the family of Vivian Luikart by sending flowers.

We encourage you to share your most beloved memories of Vivian here, so that the family and other loved ones can always see it. You can upload cherished photographs, or share your favorite stories, and can even comment on those shared by others.

Posted Oct 07, 2020 at 07:52pm
I was so sad to hear of Vivian's death. I spent 2 years on her massage table at her home and we shared the challenges of life, both the joys and the sorrows. Her family was everything to her and she loved all of you dearly, especially you grandchildren. Her healing gifts blessed me along with so many others that she touched. We were blessed because of her huge heart. Blessings on all of you.

Posted Oct 07, 2020 at 04:19pm
Oh how I will miss Vivian. I’ve been going up to her home every Wednesday for years. She was a one of a kind. She “hands down” had the gift of healing. She was a little woman who was a big hero in my life. She was strongly opinionated and out spoken about it and oh so lovable. I know it warmed her heart when the BYU athletes called her "Mama Viv".
I looked forward every week to be with her. She was my sister friend. I know where she is and that she completed her mortal probation with beauty, generosity, selfless service and love. She had a testimony of the Lord's Gospel and told me the last time I saw her that she wasn’t worried about catching the Corona virus. “I am not going to live in fear! If I get it, I get it. I trust in Heavenly Father’s plan for me.”
I love you, Vivian, and thank God for the beautiful blessing you have been in my life.
With heartfelt tears please know you will truly be missed and a piece of my heart is now in heaven. God bless you until we meet again.
Comment Share
Share via:
MC

Mr & Mrs Charles and Felicia Williams and josh and Chris

Posted Oct 06, 2020 at 11:36pm
This tree Vivian is in your honor and may it keep growing and be a place that your family can come to and share special memories with you.

Posted Oct 06, 2020 at 02:42pm
One of my favorite memories was after someone at the spa upset Vivian. I somehow ended up in the massage room with Stephanie and Vivian. Vivian told me to get on the floor so she could pop my back to release her frustration. I was scared! Stephanie thankfully went first, and since she survived, I complied. My back sounded like bubble wrap getting twisted. She was a lot calmer after that.
I think of her often. I was new to the spa industry, and even though she was feisty and forthright, I admired her. I felt like she was a protector to me. Even though I haven’t seen her much over the past few years, I can still hear her voice. My sincere condolences to Vivian’s family to have to grieve her passing during an already difficult year.
Much love and warm wishes of comfort in your time of grief. Alisha Gardner
Comment Share
Share via: 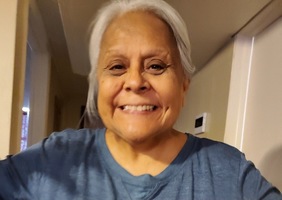